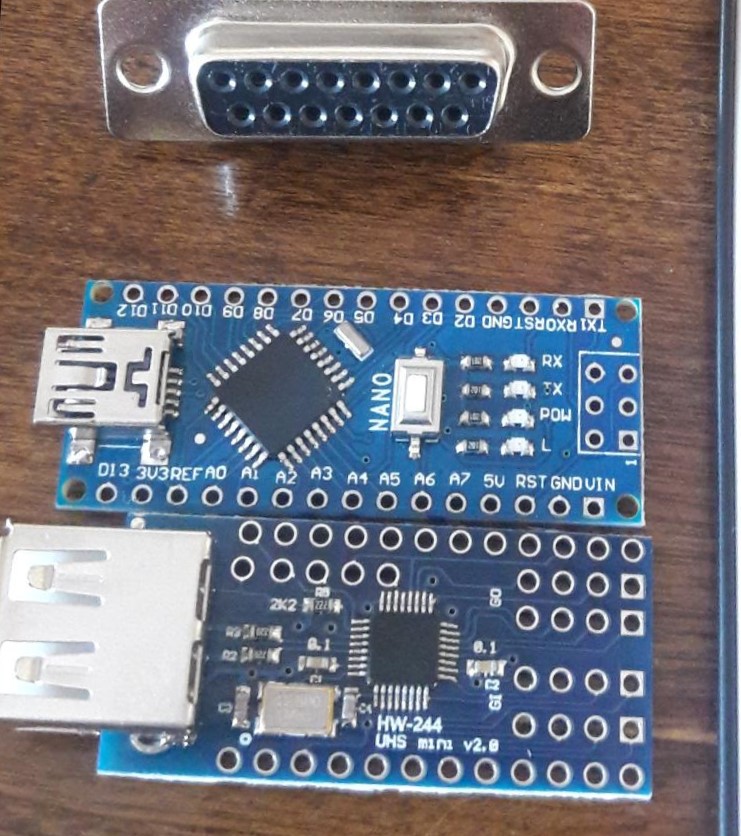 Developer Raph_friend has lately launched a project entitled USB2DB15. It’s essentially an open-source device that aims at converting USB controllers that follow PS3, PS4 & Xbox One protocols, among others, into a DB15-style connector for use with superguns or any Neo Geo console. A group of contributors eventually joined up and assisted in the development process as well as beta testing.

The USB2DB15 is built around the Atmega328P, an AVR microcontroller that is most commonly found in Arduino Mini Pro, Nano and Uno models. Raph_friend designed a custom PCB to accommodate the off-the-shelf components required to build a USB2DB15.

In addition to the previously mentioned custom board, here’s a full list of the hardware required to complete a USB2DB15 build :

Once all the parts are successfully assembled, the user is required to download the custom USB Host Shield 2.0 library and install it on to the Arduino.

As far as compatibility goes, Sony and Microsoft 1st party controllers are pretty much fully covered. 3rd party controllers (including arcade sticks) by companies like Hori, 8bitdo, RetroBit and Razer, to name a few, are being tested and added to the compatibility list with every new update release. Keep an eye on the official arcade-projects thread to stay in the loop about the latest updates and additions.

The USB2DB15 can hold up to 10 individual controller profiles, each profile has 4 preset mapping settings associated with it. Both the profiles and the preset settings can be accessed through a button-combination press.

Frank_fjs, creator of the Sentinel supergun, also chimed in and designed his own all-in-one plug-and-play PCB based on Raph_friend‘s work. NearlyLogical also vastly improved upon the original code.

The USB2DB15 project is an on-going joint effort created by arcade enthusiasts for arcade enthusiasts, and presents itself as yet another solid option for converting modern controllers/arcade sticks for use with superguns.

Compatible with Xbox One X, Xbox One S, Xbox One, Windows 10 Includes Bluetooth technology for gaming on Windows 10 PCs and tablets Stay on target with textured grip Get upto twice the wireless range compared to previous Xbox One controllers (tested … read more

(as of n/a – More infoProduct prices and availability are accurate as of the date/time indicated and are subject to change. Any price and availability information displayed on [relevant Amazon Site(s), as applicable] at the time of purchase will apply to the purchase of this product.)


(as of n/a – More infoProduct prices and availability are accurate as of the date/time indicated and are subject to change. Any price and availability information displayed on [relevant Amazon Site(s), as applicable] at the time of purchase will apply to the purchase of this product.)