This section describes the three different TV-out mods available for the Game Gear: two RGB mods and a VGA+RGB mod.  As a note: I’m not sure if Majesco versions of the Game Gear can have these RGB boards added.  I suggest using a Sega version, as they’re cheap and easy to find.

McWill is currently in the process of creating a web store.  Until then, email him at: order-lynx-lcd@online.de
McWill now offers a Game Gear kit that outputs both RGB video, as well as two different VGA modes: One that displays the native aspect ratio and the other that stretches the aspect ratio to 4:3. Also, each VGA mode also has an option for scanlines, shown on the right below.  Since he’s getting the video signal digitally from the Game Gear, it allows him to make scaling effects while having the pixels stay in their right positions and not create any lag.  Each mode is toggled by holding 1, 2 and Start at the same time. Click for full-sized: 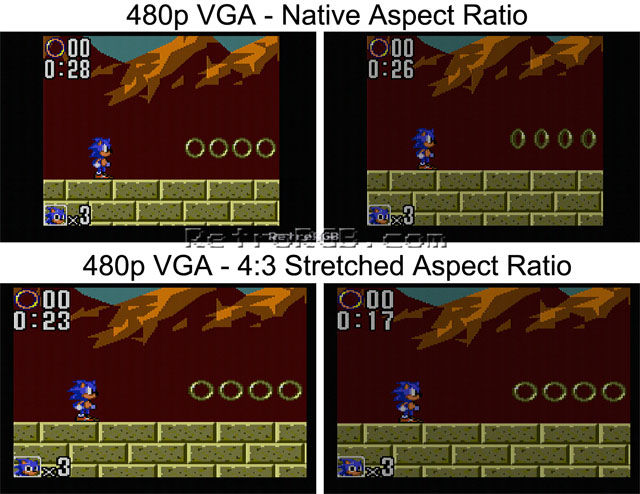 Game Gear’s output RGB in their native resolution of 160×144.  The output quality is about on-par with Sega Master System games in RGB.  The only downside is the Game Gear’s 160×144 resolution will only fill about half of a 240p screen.

At the moment, there are two different places to purchase RGB-only TV-out kits.  The installation of either isn’t very hard, it’s just tedious and requires soldering to extremely small points.

McWill’s Kit – McWill is currently in the process of creating a web store.  Until then, email him at: order-lynx-lcd@online.de
The VGA kit mentioned at the top of this page can also output 240p RGB by turning the brightness knob all the way down.  Here’s a screenshot of McWill’s RGB board vs. Tim’s.  They both look excellent, but Tim’s seems to be the tiniest bit sharper, both in the screen captures and when playing on an RGB monitor.  Also, they both show a very small amount of interference in the image, but it’s barely noticeable.  This picture is actual-size, so if you’d like to zoom in, I suggest saving it to your computer:

– I really hope someone makes a controller port mod, like the one that Otaku’s Store offers, but uses the Game Gear link port.  It would essentially make a TV-out modded Game Gear into a “consolized” Game Gear!

– There’s been rumors of an HDMI mod floating around on the forums for awhile, but I won’t post anything until it’s more then just a concept.

That’s it for now!  Please head back to the main Game Gear page for more information.