N64 RGB Kits – Compatible with all versions of the N64
Every N64 can output RGB using a more complicated RGB kit, which are generally more expensive and harder to install, but offer extra features:

Tim Worthington sells an excellent kit that’s compatible with all N64’s and can be purchased directly from his store:

Borti has released two designs for an N64RGB solution!:  A ‘general’ RGB-output kit, plus a more advanced kit that can output component video and VGA.  The advanced kit can also linedouble to 480p…as well as just output standard RGB as well!:

Borti also released custom firmware that allows for “de-blur” options.  This firmware will work on both his and Tim’s kits!

– If you have a serial number that starts with “NS1” (USA), “NUJ1” (Japan) or French systems with the model number “NUS-001(FRA)”, then you most likely have an N64 that’s compatible. Supposedly, some early Canadian N64’s also contain this chip.

– Many older Brazilian N64’s contain the same chip and can be RGB modded.  Even though Brazil used PAL-M, is was still 60Hz and only compatible with NTSC games:  http://s9.zetaboards.com/Nintendo_64_Forever/topic/7405289/1/

– If you have a serial number that starts with anything else, or is a PAL console, you’ll need to use the “advanced” kits described above.

– For more information on which serial numbers have each motherboard revision, please visit these sites:
http://forums.modretro.com/viewtopic.php?f=33&t=1417  /

Regardless of serial number, please open your N64 to double check that it has the correct video chip that’s required for RGB-modding (explained below).  To open the system, you’ll simply need a 4.5MM game tool and a philips screwdriver, as described in the tools section.

– First, remove the memory module, then unbolt the plastic cover using the 4.5mm game tool.  Then, unbolt only the screws that are circled in the picture below.  After removing just those, the entire metal heat shielding will lift off as one piece, exposing the motherboard: 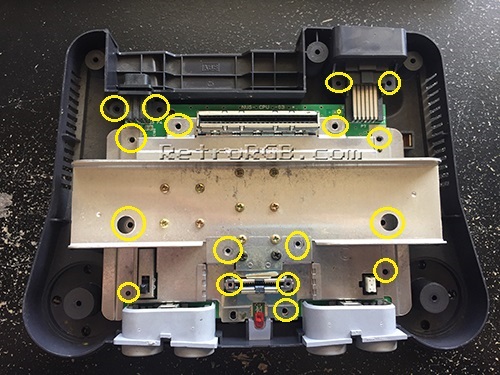 – Once it’s disassembled, look for the following chip.  If it says “VDC-NUS” or “VDC-NUS A” (like pictured below), you should be fine and can proceed with the basic RGB mod.  If it doesn’t have this chip, you’ll have to use one of the advanced mods.

If your N64 is compatible with a basic mod, you can either make your own RGB amp board, or buy one pre-assembled.  I strongly recommend the pre-assembled ones, as they generally use better amp chips (THS7374 vs 7314) and some offer more features like a sync stripper.  Links to everything you need are found in the mod instruction pages:

Now that you’ve determined which RGB mod will work for your system, please head back to the main N64 page, or head to the main console section to check out mods for other consoles.