There are many different reasons you’d want to convert a signal and this page will slowly grow to discuss all of them.  To start, I’d like to make the clarification that in this context, converters just change the signal type;  There’s no scaling or processing of the image.  This should always result in a zero-lag solution, with video quality varying.

There are a few scenarios where converting RGB to component would be the right choice for your particular setup.  If you’re using a consumer-grade CRT that only has component inputs, these are the best choice.  They might even work well on your flat-screen TV, depending on compatibility.  For more info, please check out my upscaler comparison page, as it describes in detail the difference between using RGB to component, vs an upscaler.

RetroTINK RGB2Comp & Comp2RGB:  The “RetroTINK” line of  products has just added boxes that convert between RGB and component.  These should preserve the signal quality, while allowing an easy way to convert the signals.

Shinybow SB-2840 This is a great converter, but the recent release of the much cheaper RetroTINK products has bumped it to second in line.  It was tested and verified on an oscilloscope and it works with 240p, 480i and 480p.

CSY-2100 & Clones I tested both a CSY-2100 SCART to Y-U-V converter and a clone system (the clones look similar to the one in the upper left picture, but have the screws on the sides, not front. The original CSY-2100 seemed to work well, however they’re expensive and hard to find.

I didn’t have as good results with the clone’s though;  I had to tweak the tuning POT’s before it looked right, which should never be necessary with analog video. Here’s the POT’s I tweaked, but YouTube user Billkwando also has a good video about it: 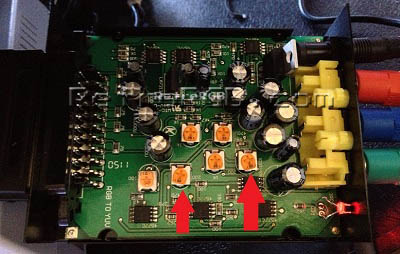 As an FYI, if you’re using a 240p console on a basic, consumer-grade CRT, you won’t see a big difference between RGB (or component) and S-Video…and it’s certainly not as drastic a difference as seen on high-end displays. If both your CRT and console support S-Video, that might be a cheaper solution when available.

Any device that converts from analog (VGA, Component, Etc) to HDMI with no scaling should be a lag-free device.  Video quality may vary, but as long as lag isn’t added, it shouldn’t harm the overall gaming experience.  WARNING:  Makers of cheap generic devices often sell inconsistent products.  I’ll list some equipment I’ve personally tested to covert 240p analog to 240p HDMI, but if you purchase, please understand there’s a chance you might get a different revision:

Component (YPbPr) to VGA (RGBHV) & SCART (RGBs)
The Behar Bros have recently released the Garo, a component to SCART / VGA box.  This box ads no lag, as it doesn’t scale the video and only converts the signal.  It offers some great features, like dual outputs, scanlines, SCART output and both RGBs / RGBHV outputs via the DSUB (VGA) port.  I found that it performed as good or better then all the other high-end component converters that used to sell for much more money! The only issue I’ve heard people complain about is the Garo’s scanlines aren’t as pronounced as the scanlines from their other boxes, such as the SLR or Toro.  I actually took screen captures of both the Garo’s scanline output, then ran the Garo through the Toro to compare the image.  Click on the picture to download a zip file of all the original screen captures (they’re not watermarked, so please don’t steal them ;p), but this picture sums it up pretty well – It’s not a huge difference, but the Toro’s scanlines are noticeably darker:

RGB to VGA (no scaling)
Some VGA monitors can accept a 320×240 signal, just not at 15Khz (or as RGBs).  Basically, the main differences between RGB and VGA is sync (RGBs vs RGBHV) and the refresh rate of the signal;  RGB refreshes at 15Khz and VGA usually refreshes at 31Khz or higher.  I haven’t run into many solutions where this is the best option, however I wanted to list it.  Keep in mind that when you display 240p at a 31KHz refresh rate, the scanlines will look thinner then the original RGB signal looks on an RGB monitor or CRT TV.  In my opinion, this changes the whole look of the game and doesn’t look good at all.  Said differently:  You can’t make a VGA CRT look like a RGB Monitor by using a converter. Decent RGB to VGA converters (that do nothing other than make the signal compatible, not “upscale”) are usually around $100. Keep in mind, these converters are not compatible with light gun games and the SegaScope 3D glasses for the Master System, since both were designed for 15Khz CRT.VGA to HDMI (no scaling)VGA to HDMI converters that offer no scaling are very affordable and don’t add any lag.  These will only work if the source signal is 480p VGA and up, but are a great choice if you simply want to display 480p VGA on a TV that only has HDMI inputs.  Check the links to the right to purchase –>
Please head to the Display RGB page for more info on how to get an RGB signal on your display. If you’re here as part of the RGB Guide, please either move onto the next section: upscalers, or move along to getting your SCART RGB cable into your display.