This page shows the different versions of Game Boy systems and the light mods that are available for each one. There were many different models and color options available, but I’ll focus on the main revisions and hardware changes.

I also wanted to compare the screen size of each system, so I measured each with the same GB game.  Some displays don’t show the image all the way to the edge (as shown in the pic below) so I only measured the actual used screen area.  Keep in mind I don’t have precision instruments, so I may be about a millimeter off.  This should still give you a good idea of screen size difference: 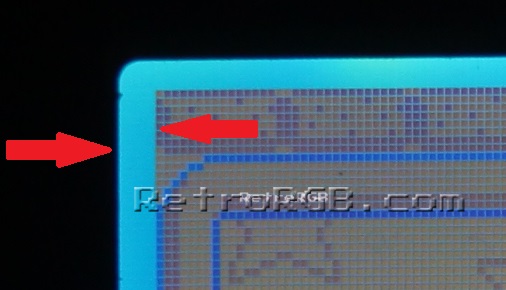 The pictures on the right were all taken very carefully in a dark room to ensure a fair comparison. Unfortunately, the brightness and contrast setting of each system was slightly different, so I had to change the shutter speed and iso settings for some pictures, but I tried to make each as close to the original as possible. I’ll say this though: Pictures can not do the GB & GBP backlight mods justice…they both look amazing. Please read on for more info and click on each picture for a full-sized view.

As an FYI, if you decide to install an aftermarket light on your Game Boy or Game Boy Pocket system, I strongly recommend that you use the bi-verted mod and that you install a brightness knob as well. I’ve found that the screen is usually way too bright when on the brightest setting and they usually need to be adjusted to the ambient light of the room you’re in.  I had each of my light mods done by thursdaycustoms.com, but there are DIY kits available and mmmonkey has good info here as well.

As an FYI, when playing Game Boy games on a GBA, you can change the color palette: 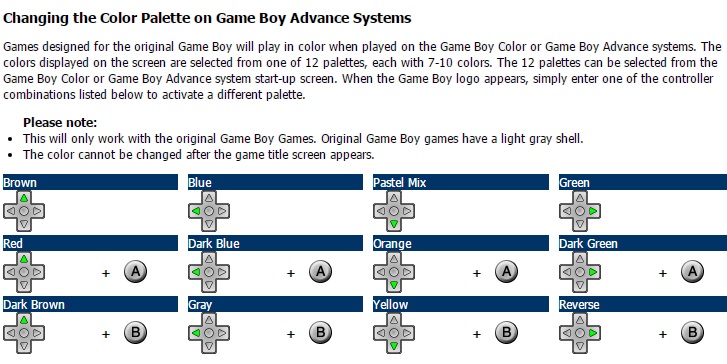 After testing many different model Game Boy systems, I strongly recommend the GBA SP AGS-101:  It plays the entire Game Boy library, the screen is amazing and no modifications are necessary for the best performance.

Click here to go back to the main Game Boy page.