The RetroTINK 2x Multiformat just got an update that allows it to pass though 720p, as well as pass through 480p with uncompressed (4:4:4) colors.  This is a free update every M owner should get right away and if you were on the fence about buying, this might make you reconsider:

The conclusions I came to in the original review (above) are all still accurate, but this written review details all the amazing updates.  First, check out the short video on how to update your TINK’s firmware, then keep reading to see all the changes:

As stated in the original review, the TINK-M isn’t the best choice for pre-5th generation consoles, however it’s an awesome choice for 6th gen and the main reason is the lagless deinterlacing of 480i signals.  That means consoles like the PlayStation 2 can play the entire library without worrying about all the lag your TV probably ads to interlaced signals.  Then, for games that are 480p, the TINK-M will just pass the signal through with no interaction required!

The major update this firmware provides is 480p oversampling that allows true 4:4:4 uncompressed colors to pass through.  The launch day firmware of the TINK-M compressed 480p to 4:2:2, which in the context of the PS2 wasn’t that big of a deal;  Yes, you’d loose some color resolution, but not many PS2 games are 480p and the tradeoff was (in my opinion) well worth it.

Consoles like the original Xbox were a different story though, as almost the entire library was 480p capable and had a handful of 720p titles as well.  Before this update, using something like a cheap analog to digital converter might have made more sense…

…but after the update, the TINK-M becomes a viable choice for all 6th generation consoles.  Please allow me to explain:

The first benefit of the new firmware, is that 480p output is always oversampled to 1440x480p, which allows the chips inside to sample the colors at 4:4:4.  All HDMI devices should process this signal properly, however if you’re using a DVI monitor or capture card (like the Datapath Vision E1s), this might cause the aspect ratio to be too wide.  For capture and streaming, this isn’t a big deal since you can just resize, however if your monitor (or TV) isn’t compatible, you can just set the TINK-M to passthrough mode and it will default to the previous 4:2:2 output.  This will be compatible with every device.

When in regular mode (not passthrough), pressing the option button will turn the LED blue, indicating a “hi-res mode” has been activated.  This sends 1440 true samples per line instead of 720, which potentially has the same advantages of oversampling analog captures, such as less issues with phase or resolution mismatch during the analog to digital conversion.  I definitely recommend trying it out!  Native 16:9 games should work fine, but 4:3 may have aspect ratio issues on certain TV’s.  This wouldn’t be a problem with capture/streaming though, since you can just resize the window.

Here’s an example of the changes (click for full-sized), that were taken with a camera (manual mode, all same settings) on my cheap LG LCD TV.  Also, the TINK-M seemed to produce a slightly better image then the generic analog to digital converter (ADC).  It’s not a huge difference, but it’s nice to know that spending the extra money on the TINK-M’s lag-free deinterlacing will also get you a slightly higher quality ADC.  As a note, the oversample mode seemed to work great on this 2018 LCD TV, but my 2016 OLED stretched the aspect ratio:

The other feature added with these firmware updates is the ability to pass through 720p signals.  This should be considered a “beta” feature, however it worked fine for me.

There are no extra features available in 720p mode, however the video quality seemed a bit better than the generic ADC and wasn’t as dim overall.  This makes sense, as the TINK-M is a much higher quality product than most cheap ADC’s, using high quality chips and a refined power circuit that you’d never find in a $20 box.  I certainly wouldn’t recommend spending the extra money just for a 720p ADC, but if you need to deinterlace 480i and want some 480p options, the TINK-M’s value is really starting to show.

Just to confirm, I did use the exact same settings and cables for both in the capture below: 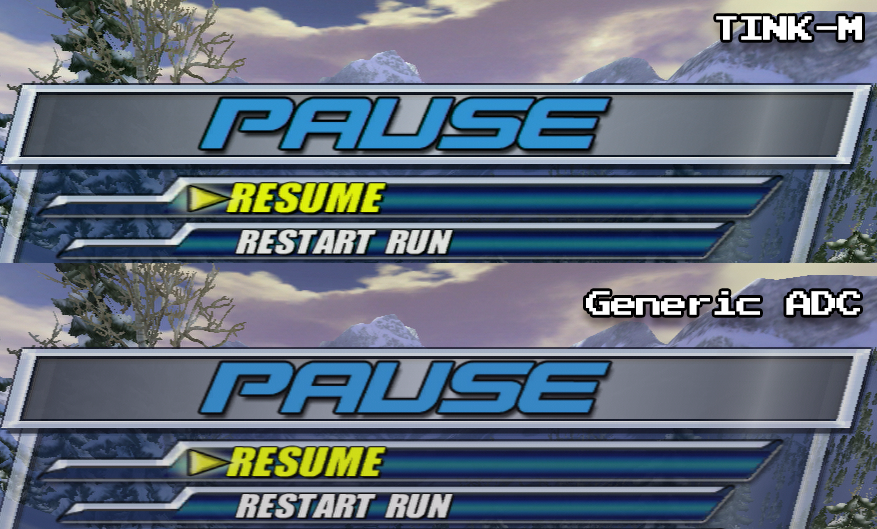 The TINK-M can only pass through 1080i as 1788×1080, since the video ADC cannot sample the full 1920 pixels/line.  Honestly, in my opinion, passing 1080i isn’t really something gamers would be interested in anyway, as sending any interlaced signal usually adds significantly more lag to a flat-panel display.

There are barely any Xbox games compatible with 1080i anyway and all 1080i games of that era have nice-looking 720p modes, so I don’t think most people would be bothered by the lowered 1788 x 1080i samplerate…or even if it didn’t work at all.  I’m sure there’s someone out there who insists there’s a scenario that 1080i is “needed”, but I just don’t think it matters for 99.9% of 6th generation console users.

As a note, the 1080i mode didn’t really work on my TV, but once again, I’d never actually use it.

One last thing to note are the composite and S-Video inputs.  While I discussed them in the video review, I wanted to reiterate how I feel they’ll be properly used.

As discussed in the review, the TINK-M has a very nice comb filter, that can be seen below in the blue background;  The checkerboard pattern often introduced by a messy composite video signal is much less noticeable!

Unfortunately, the bilinear scaling “softens” the image and the result is a look that’s similar to the TINK Pro’s smoothing filter – Not something that’s a good fit for 2D graphics.  It’s not nearly as noticeable as with component or S-Video, so it’s not like using composite on the TINK-M would ruin the experience or anything, it’s just not as sharp of a result.  If your plan is to mostly use 6th gen consoles, but also want to connect a NES or something it’ll be good enough.  Also, if for whatever reason you own the TINK-M, plus an OSSC, you can use the TINK-M in passthrough mode to take advantage of its comb filter and let the OSSC scale from there:

Alternatively, using those higher quality outputs with 2D games definitely changes the look too much for my taste:

However, composite video on consoles with 3D graphics looks great on the TINK-M!  The combination of the updated comb filter and smooth scaling translate really well.  I think this is one of the features that ads to the use case of the TINK-M over something like an OSSC:  The ability to accept composite, S-Video and component from 6th generation consoles might be a perfect fit for some people’s setups:

One other quick thing to mention is using the RetroTINK Classic, Pro or M in passthrough mode allows 480i to pass directly to your TV, which is great for connecting analog video players to TV’s that don’t have analog inputs.

Both the Pro and M also offer scanline options and while you’ll need to use that with bob-deinterlacing turned on, they mask the flicker and create a fairly authentic “CRT-look” for video signals.

You can also use the passthrough mode to capture things like VHS tapes, provided your capture card is compatible with 480i.  As a note, I strongly recommend always using passthrough mode with video signals, to avoid the flicker of the TINK’s deinterlacing (unless using scanlines of course).  Remember that you won’t need to worry about lag with TV signals, so sending 480i won’t be an issue in this scenario.

While all the TINK’s work well passing through video signals, the advantage of the TINK M’s comb filter might be a help for something like VHS capture (DVD shown below, since my VCR is in storage).  While I probably wouldn’t recommend buying the TINK-M just for this use, if you already own one for gaming purposes, know that it would also work really well for your TV signals:

My conclusion on the RetroTINK 2x Multiformat is the same as the original review, with more enthusiasm behind it:  The TINK-M is an excellent choice for 6th generation consoles.  If you’re only using component video, the OSSC may be a better fit, as it offers similar options and can linedouble 480p, but if you also need composite and S-Video support, the TINK-M is the winner.

The OSSC and original RetroTINK line of products are a better choice for 5th generation and earlier consoles due to their scaling algorithm.  The only exception to this would be if you mostly played 6th generation consoles, but also have a console or two that you’d like to use with composite video…especially if it’s a console with 3D graphics such as the Nintendo 64.

While more choices = more confusion, I truly think they’re a benefit to all retro gamers.  If you’ve made it this far into the post, hopefully you’ll have a better understanding of what’s the best option for you.