Krikzz has posted a few updates regarding the Everdrive N8 and N8 Pro Flash/ROM carts.  First, Krikzz has released a beta “auto-boot” firmware for developers that want to test their games on an Everdrive as if it were a real cartridge:  https://krikzz.com/pub/support/var/EDFC-autoboot.zip

To auto-boot, simply rename your existing “EDFC” folder and add that one.  Then choose your game and it’ll auto-boot directly to it from that point on.  In order to access the menu’s again, delete the autoboot EDFC folder and boot with the original again.  It’s not as easy as adding a toggle, but in my opinion is perfect for dev’s looking to test or demonstrate their games in an original NES or Famicom cartridge shell without having to burn their own chips & custom cart!

Krikzz also confirmed that he’s currently concentrating his NES mapper efforts on the upcoming N8 Pro, but will port all mapper updates back to the original N8 after he’s finished.  That means the only compatibility difference between the two should be ROM’s that are over the original N8’s memory size.  This is pretty awesome, as the N8 is already a great product that’s been supported for years;  The fact that’s it’ll still get updates even after the N8 Pro is released is a testament to Krikzz’ customer service.

Lastly, Krikzz confirmed you can have up to 100 save state slots per game on the upcoming N8 Pro and each will have a date and timestamp on it.  I imagine this is great for speedrunners who often practice specific parts of the game. 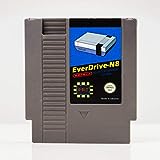 (66)
$158.70
SUPPORTS 99% NES Famicom games. Famicom, NES, and Twin Famicom systems are supported. Many NES/FC clones supported as well. CART SUPPORTS NES and FDS ROM images SAVE STATE FUNCTION. SUPPORTS SD cards up to 32GB. CIC chip should be re configurated if ... read more
(as of September 20, 2020 - More infoProduct prices and availability are accurate as of the date/time indicated and are subject to change. Any price and availability information displayed on [relevant Amazon Site(s), as applicable] at the time of purchase will apply to the purchase of this product.) 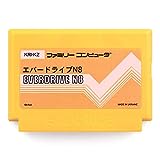 (9)
$158.70 $149.00
SUPPORTS 99% NES Famicom GAMES. QUICK LOADING OF GAMES SAVE STATE FUNCTION GAME GENIE CHEAT CODE SUPPORT EXPANSION AUDIO SUPPORT
(as of September 20, 2020 - More infoProduct prices and availability are accurate as of the date/time indicated and are subject to change. Any price and availability information displayed on [relevant Amazon Site(s), as applicable] at the time of purchase will apply to the purchase of this product.)

#EverDrive N8 PRO. More save state slots (up to 100 per game) and save date/time indication. pic.twitter.com/IqQjoOhKNE