CBS All Access has jut announced that the documentary Console Wars will premiere exclusively on their service on September 23rd.  The documentary is based on the amazing book by Blake Harris (link below) and has been in the works for a few years now.

I’m really looking forward to it and think it has the potential to surpass Netflix’s High Score documentary…at least when talking about that particular time period:  https://www.cbs.com/all-access/

If you can’t wait for the documentary, I’ve read the book and as of now it’s the single greatest recounting of the Nintendo vs Sega “console wars” I’ve ever read/heard.  I strongly recommend it to anyone interested in that section of video game history! 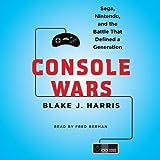 Console Wars: Sega, Nintendo, and the Battle That Defined a Generation

(as of February 5, 2023 – More infoProduct prices and availability are accurate as of the date/time indicated and are subject to change. Any price and availability information displayed on [relevant Amazon Site(s), as applicable] at the time of purchase will apply to the purchase of this product.)