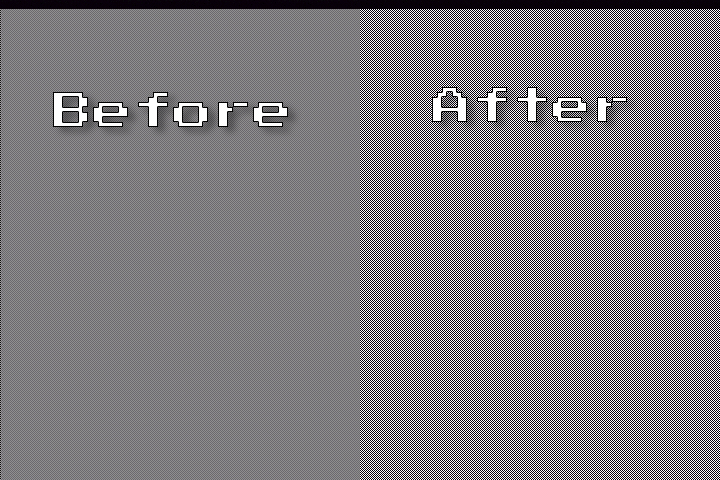 Extrems, creator of the Game Boy Interface software, as well as contributor to the GameCube homebrew Swiss has just made a pretty amazing discovery!  Apparently, there’s a problem with the original Nintendo Revolution SDK that effects every piece of 480p software ever released on the Wii.

That’s right, the software dev kit used to make all commercially sold Wii games has this issue!  The exact problem is the way the SDK “talks” to the AVE-RVL chips on the I2C bus inside the Wii, causing certain images to be displayed wrong; This is shown in the picture above, but it’s best represented when viewing the pic at 100% (download and open in a photo viewer for best results).  Essentially, its a “translation” problem when going from digital to analog on the outputs…a DAC configuration issue.

This could also account for why certain model Wii’s output sharper than others.  Luckily though, mods like the Wii Dual bypass these chips altogether, meaning you’ll get a sharp image regardless of Wii board revision, or this software bug.  I tried to show this in my recent review, but capture errors ruined all chance of properly demonstrating this…

What we need now, is for launcher software such as USB Loader to include a real-time patch for this issue, both for ripped games and discs.  Homebrew projects are already taking advantage of Extrems’ find and Not64, as well as Enhanced mGBA are already both updated.

More information on Extrems’ findings can be found here:  https://github.com/ExtremsCorner/libogc-rice/commit/941d687e271fada68c359bbed98bed1fbb454448

…and I’d just like to take a moment to point out how ironic it is that the same week Nintendo started harassing Modern Vintage Gamer for his videos on Nintendo Homebrew, a homebrew developer caught an error left unseen by Nintendo’s own team for well over ten years.  I have some choice words I’d like to say about the Big N, but instead, I’ll leave you with this: