Over 20 years ago, Alex Kidd and Simon Fang set out and did a partial translation of Ninpen Manmaru on the Saturn. This is technically the first documented fan translation effort for the Saturn, only releasing about 3 years after the system’s demise in the west.

Most of the text and cutscenes were translated by Alex Kidd and Simon Fang, but many visual tile elements remained in Japanese. Sadly, the translation patch stopped updating quite a while ago, and the website and detailed information is long gone on the translation process, and now only exists as an internet archive site: http://web.archive.org/web/20020105004548/http://www16.brinkster.com/ninpen/PIY.html

For those of you unaware of Ninpen Manmaru (Also known as Manmaru The Ninja Penguin), this cutesy platformer, based of the anime/manga of the same name, has you control the character Manmaru, a Ninja Penguin who cannot use the Nenga Clan’s devine art to it’s full potential. His master sends him to the Ninja Mansion in order to perfect his powers, and the game is your journey to said mansion.

Around February of 2020, SEGA Xtreme user darkfalzx decided to start hacking away at completing the translation effort by adding translated graphics into the game: 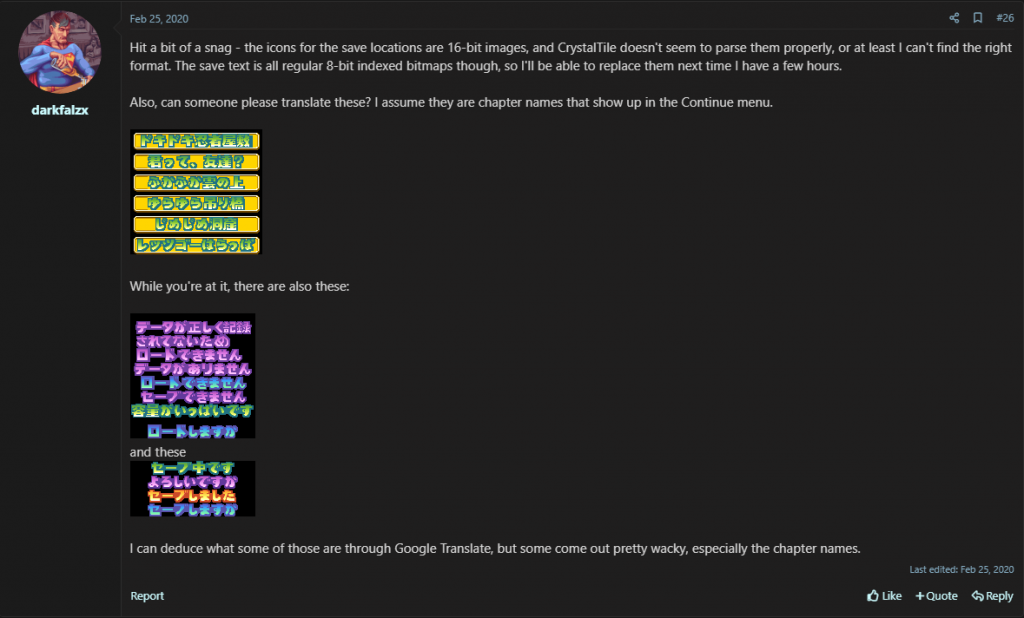 darkfalzx also found a game crashing glitch when displaying the ending game text, a glitch that existed all the way back in 2001, but never fixed. This is due to the game being notoriously difficult, and no one ever finishing the game, thus the bug remaining unreported. He also made the patch compatible with Knight0fDragon’s patching program, which has become the defacto standard for patching Saturn games in 2022.

Knight0fDragon and others mentioned working with him on tightening up some of the cutscenes to fix subtitle timing, and the font used in said subtitles, so we’ll have to wait a little longer to get a finalized patch. For those of you who want to just play the game in English, I’d highly recommend checking out the latest released patch!

Thanks again to darkfalzx and everyone else for working on this patch! It’s crazy to see such an old fan translation get a tune up after all these years!

You can read the original article, and other articles on awesome Sega Saturn Fan Translations here:

Liked it? Take a second to support TraynoCo (Sega Saturn, SHIRO!) on Patreon!