On December 10th, 2020, Cyan released a new remake of the classic 1993 adventure game Myst exclusively for the Oculus Quest platform. So why am I writing about it now? Because on August 26th, 2021, the game was released on PC with optional VR support through Steam, Epic Games Store, GOG.com, and Xbox Game Pass for PC (sadly no VR on that version), and on Xbox with support for ray tracing on the series X.

This new remake was built from the ground up in Unreal Engine 4 with VR in mind and has made several changes to accommodate a few of the necessary things needed to make VR gaming more comfortable. One notable example is that all items that you would find on the ground were moved higher up, so that people playing while standing don’t need to bend down to pick stuff up, and people who are playing while sitting down aren’t locked out of grabbing things off the ground. But since I’m sure most people reading this don’t have a VR headset, I’m going to focus on how it compares visually to the original game.

Actually that’s a bit of a half truth, to represent the original I will be using the 1999 re-release of Myst called Myst: Masterpiece Edition. It’s the same as the original except that the graphics are in 24-bit color instead of 256 colors.

On the left is the original, and on the right is the new remake.

And obviously, there is a huge leap in fidelity in the remake that the original doesn’t have. But given the time it came out, it makes sense, and I still think the original has a charm with its pre-rendered visuals. And honestly, I wish there was a way to port the original myst island model into a game engine so that version could also be freely explored.

As you can see in this image, they changed the controls for the clock hands in the remake, allowing you to be able to see the hands on the clock as you move them, and while you may not be able to see it in this screenshot, the water on the remake is animated and looks really nice.

And for a bit of variety, here’s a screenshot of the Mechanical Age. As you can see here they greatly expanded this area visually, widening the ground and adding some extra gears to the ground. They even gave the water a rainbowy sheen to it, showing that oil has somehow been mixed into the water.

Now, I know I’m late to writing this post, but being late has its perks. For example, on September 3rd, 2021, in response to fan feedback Cyan released a patch for the game that added the ability to use the FMV from the original Myst for certain parts of the game. Mainly things like the red and blue books in the library on Myst Island. The original FMV is on the Left and the new CG FMV is on the right. 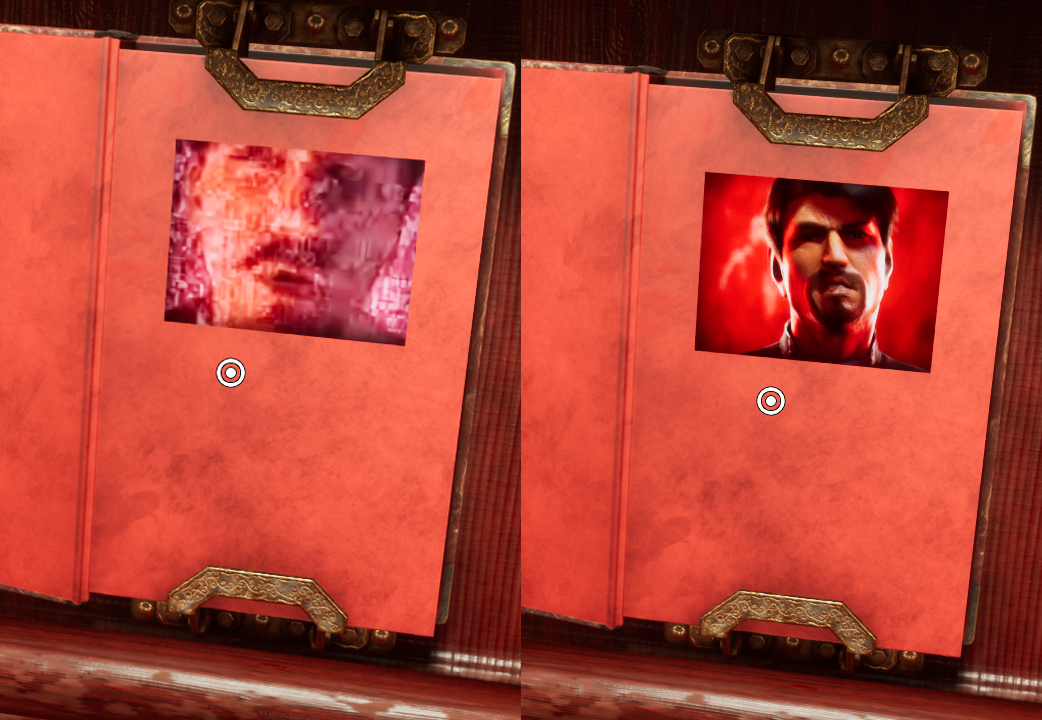 For VR I personally prefer the new CG FMV that the remake shipped with because the video has 3D depth to it, whereas the original FMV is more sunken into the book. But overall, it’s down to personal preference and I’m glad that the player is given the option to play with the original FMV if prefered.

I personally love this remake a lot. I tried playing the original and the 2014 RealMyst Masterpiece Edition several times in the past, but I would end up getting lost on the island and not making any progress. But then I decided to get the VR version on my Oculus Quest 2, and I fell in love with the game. I figured out the puzzles fairly quickly, and every time I solved a puzzle it made me feel great. And I can say that I am happy that I finally was able to beat a version of Myst. So yeah, this remake is a definite recommendation from me. If you have any VR headset, are interested in trying Myst, or just want to play it again, I highly recommend that you pick up this remake.