Twitter user @DarioSamo has recently released a mod for the PC port of Super Mario 64 called SM64RT (Super Mario 64 Ray Tracing). What this does is that it completely overhauls how the game looks, and how it’s rendered. Because it’s using something called path tracing. What most games that support ray tracing do is that they use it primarily for things like lighting, shadows, and reflections. Now path tracing is a step above that where everything is rendered with ray tracing, allowing for things like better simulation of global illumination and light bounce as well as having more accurate shadows. Allowing for visuals like this.

Now the way you get this set up may seem a bit complicated, but it’s pretty simple since Dario tells you on his GitHub Repo for it that it’s the some steps as building the SM64EX port and it is linked in the readme on the site. All you need is a ROM of Mario 64 that you (preferably) dumped yourself, and follow the instructions to clone and compile the code. One thing that isn’t mentioned though is that you need to clone the master branch of SM64RT, the nightly branch doesn’t work. Another thing you may run into if you have a gaming laptop with Nvidia Optimus is that by default the game may try to use your low power integrated graphics chip instead of the RTX chip in your system. I’ve never used a gaming laptop before so I don’t know how to fix it, but chances are that it’s a simple thing to fix.

Update: SM64RT has been added to the SM64PC Builder program, which means the process of compiling the ray tracing mod has been streamlined and now anyone can easily get the mod. 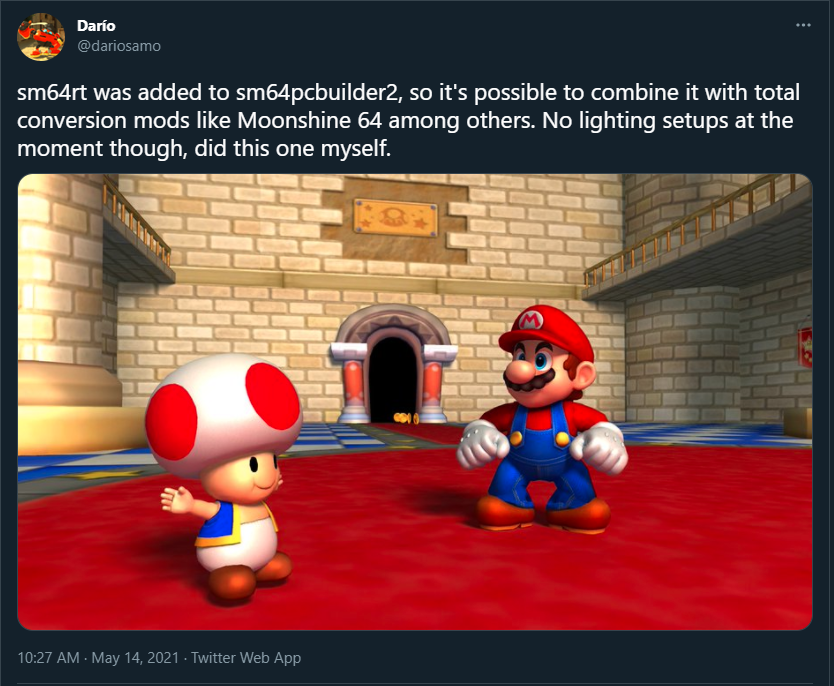 Oh yeah, and you also need to have a PC with graphics card that can do ray tracing. So the technical minimum is an Nvidia GTX 1060, but I wouldn’t be surprised if the prefered minimum is more along the lines of an Nvidia RTX 2060. Especially since my 2060 super can’t maintain a stable 30 FPS at 1080p with the internal resolution set to around 80% with all the fancy RT options turned off. But I kinda like how it looks without the fancy features more anyway.

This mod is freaking cool and I can’t wait for more updates and optimizations to be made to it. And of course the version for the Render 96 project to come out. And overall, it makes me wish more retro games with open sourced code bases get the same treatment. I would love the see the first Half-Life get this treatment (a man can dream, can’t he?) But, seeing things like proper reflections of the environment on Metal Mario, to even the stars light up the world around them, it just looks incredible and I’m sure nobody thought they would ever see graphics like this in Mario 64. And I’m excited to see the future of this project and will definitely be keeping my eye on this. And I urge all of you to do the same. And to end this off, I’m just gonna show a few more screenshots that I didn’t fit in between the paragraphs just to share more of the eye candy.