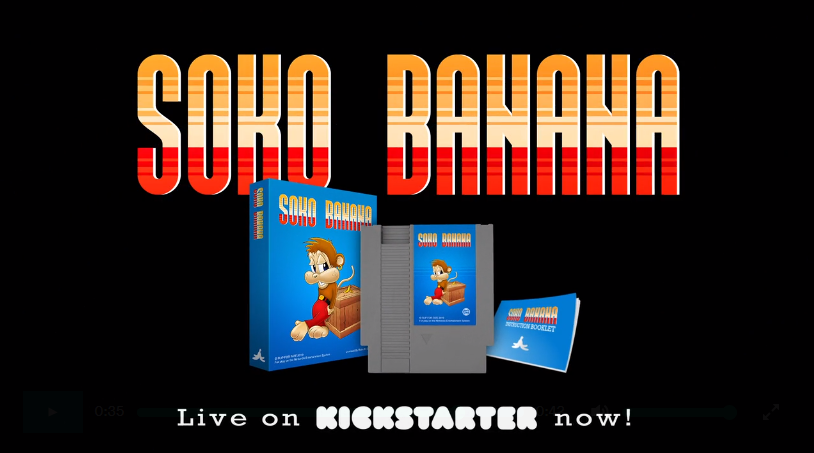 A new homebrew NES game just made its goal on kickstarter with 17 days left as of the time that I an writing this article.  The game, named Soko Bananas is an overhead puzzler that reminds me of classics such as The Adventures of Lolo, and Kickle Cubicle.

Per Flip for Fate, the developer, the game will be sold as a complete package ($47 USD) that will work on real hardware. There is also a ROM only ($5 USD) option and everything in between the two. Features include the following:

The game is still a ways off with an estimated release date of March 2020.  The developer does provide a demo ROM which they suggest to use with the MESEN emulator.  I tested it out as suggested, and the game is a simple but fun game that was enjoyable.

Out of curiosity, I also tried the ROM file on an Everdrive N8 and my top loader NES. Unfortunately, that resulted in an unsupported mapper error.  It also did not work on the Retrix emulator for Windows which uses Nestopia as its NES core. Multi-core emulator frontends such as Retroarch may allow for more extensive testing.

This project will only be funded if it reaches its goal by Sun, June 2 2019 6:02 PM EDT, and there are stretch goals such as an arranged soundtrack, end boss(?), and a hidden island should they be met.

Always keep in mind that Kickstarter is not a store, and that there is inherent risk in funding anything.  That said, I’ve had a pretty good experience with retro gaming ventures up to this point.