The unreleased Sega VR game Nuclear Rush has been found and is now playable in “VR” on the modern VR headsets via emulation.  While it’s fair to say the “16-bit VR experience” hasn’t exactly aged well, it’s still an awesome glimpse into something way ahead of its time:

This all started when Gaming Alexandria’s Dylan Mansfield got in touch with the co-founder of the company that made a Sega VR game, Kenneth Hurley.  Kenneth was able to find a CDROM from 1994 that contained the complete source code of the game Nuclear Rush.  Dylan then got in touch with Rich Whitehouse from the Video Game History Foundation, who used the source code, as well as the other development tools found on that CDROM to learn more about how the game worked.

While getting the game complied and running is always an impressive feat, the real excitement in this game come with the emulation of the Sega VR headset.  Rich was able to match the software’s expected yaw and pitch locations to a modern VR headset;  Interestingly, there didn’t seem to be any data for “roll”, making this a 2-axis game and possibly a 2-axis headset.  Without a hardware prototype and more games to evaluate, it’s hard to tell.

In order to get the display emulation accurate to the original, Rich contacted Nuclear Rush’s lead programmer, Kevin McGrath, who was able to confirm things like each’s eye’s display in the original Sega VR headset was running at 30Hz.  Kevin also mentioned that most of the game’s development was actually done before any VR hardware was sent to them!

With this new info, Rich was able to successfully write a software emulator that first demo’d the 3D effect in anaglyph 3D with typical red/blue glasses.  He then moved onto implementing OpenVR into the emulation, which seemed like a tremendous amount of work, but allowed the game – with head tracking implemented – to be playable on modern VR hardware. 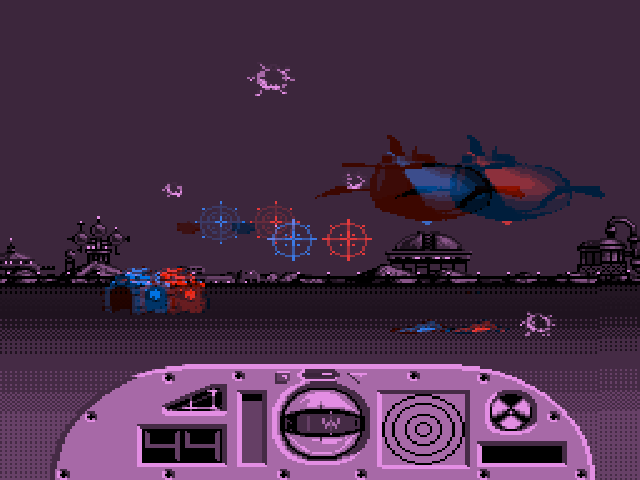