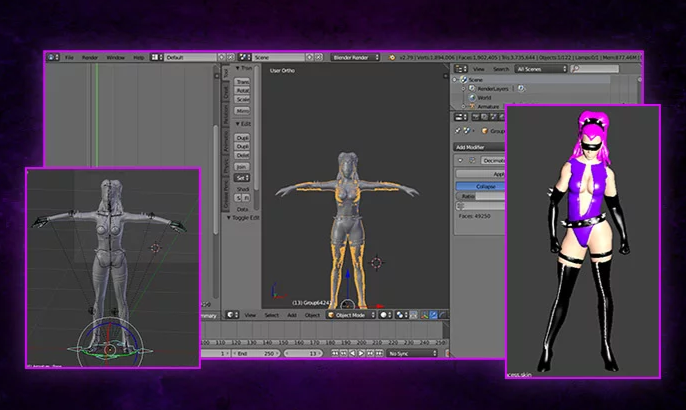 A new homebrew fighting game was recently revealed on the Sega-16 forums. The game, which currently goes by the name of Insane Pain, was inspired by Mortal Kombat with a pre-rendered look similar to Killer Instinct.  Similar to the latter, the graphics are 3D models created in Blender which are then converted to 2D sprites that can be displayed within the Sega Genesis / Mega Drive limitations.

This is a slight deviation from Mortal Kombat, which was created by digitizing human actors which were then converted to 2D sprites. Later games in the series eventually progressed into using 3D models as technology improved.

There is one caveat before you Mortal Kombat & Killer Instinct fans get too excited:  “It is still early stages and he doesn’t really want to think about things like a physical release or pre-orders yet… It is a hobby thing right now as I understand. But I think he is dedicated enough to actually stick with it.” according to 108 stars, the thread starter.

This was also confirmed by one of the developers; Mredit, who stated on the very same thread that “It’s a hobby project (for now)…Pixelart is great, but it takes a lot of time.” The team behind Insane Pain is composed of three members who claim to be fans of 16-bit 90’s fighting games.

That said, some sprite work has already been demonstrated. It’s extremely early, but interesting nonetheless. The Sega Genesis can display a relatively small amount of colors on screen at once when compared to modern consoles and even its competitors during its heyday.  Even the SNES, which can display far more colors onscreen at once challenged developers when creating Killer Instinct and Donkey Kong Country; Two games which pioneered this technique.

Insane Pain also has a professional looking website along with some video which can be seen here.

Although the game is in its very early stages, some of the expected features are:

Casual observation shows that Insane Pain does have Mortal Kombat inspired gameplay roots. For example, the way that the uppercut move is animated and the effect that is has on characters including the gratuitous use of blood is pure MK. This will be an interesting game to keep an eye on during its development process.

There is no time frame or release information at this time, however, as seen below, the team is looking for help in other ways as they are looking for assistance from: