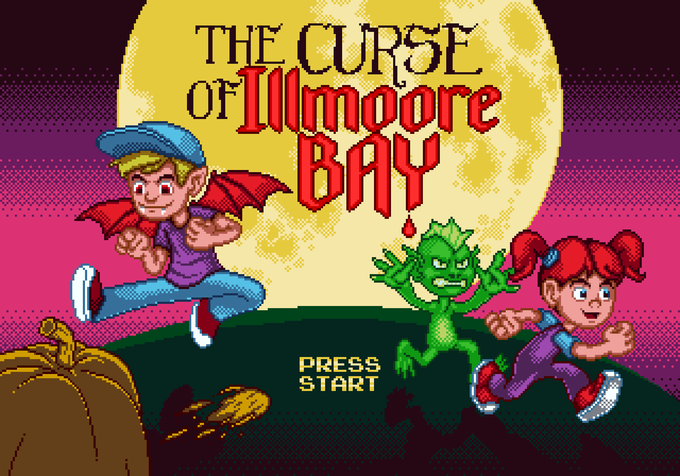 The Curse of Illmoore Bay, formerly known as Project Halloweenville, reached its $7500 USD goal on Kickstarter in just 24 hours.  At the time that I am writing this, the game still has 27 days to go for the few stretch goals posted.

For those unfamiliar, The Curse of Illmoore Bay is a brand new from-the-ground-up Sega Mega Drive / Genesis action platforming game.  There is a playable demo available, and the game will get a full physical release with various different options available for those that choose to fund the development of the game.

I played the demo on my Mega SG as well as my Genesis and it sports some nice animations and color use. The controls are responsive but not in the standard order that most gamers are used to.  For example:

Hit detection was a bit off with the standard attack, and the opening music was almost painful to listen to, however, even in its demo state, the game looks and feels good. After a few seconds, the music also settles into a cartoony vibe that sounds much better.

Per the developers, controls and hit detection are being worked on in response to feedback which is a good sign.

Release is scheduled for June 2020 which is reasonable.  Most assets are done according to the dev team. Prices range from   (Update: 05/20/19) $15 for a digital version to $1750 USD to become a playable character. I suspect many will opt in for the $20 ROM file or the standard $60 complete in box option.

As always, keep in mind that Kickstarter is not a store and that anything funded is at your own risk.