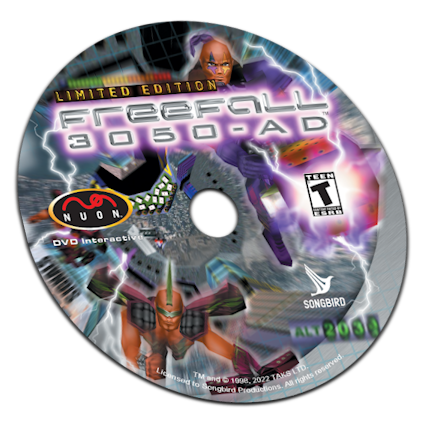 Pre-orders have just opened up for the Songbird Productions re-release of Freefall 3050 AD for the NUON. Originally released in 2000 for the DVD-based system, the game is known for it’s unique style of gameplay and thumping techno soundtrack.

Songbird re-released Iron Soldier 3 for the NUON last year, but has changed it up this time with two different editions of Freefall 3050 AD – Limited and Signature. Both editions will include a professional reprint of the game and an updated manual with additional original concept art. The Signature Edition will come signed by creator Tony Takoushi and also include a mini poster and pin. This version is limited to only 50 units, so die-hard NUON fans better put in your orders now! Already own the game and are looking just for the mini poster and the pin? Songbird has you covered.

If you’d like to see some footage of Freefall 3050 AD’s gameplay, along with other NUON games and goodies, check out Gameplay and Talk’s video here:

And if you’d like to read a 22-year old review of the game from it’s original release, head on over to the most informational NUON site on the planet – NUON Dome.