The fan-made port of the game Cave Story to the Sega Genesis has been updated and it appears savegame support has been fixed:  https://github.com/andwn/cave-story-md/releases

It’s odd that the full list of changes (below) since the last time we wrote about Cave Story don’t list a savegame issue at all.  I did attempt to report the issue and it’s definitely fixed;  The video above shows v0.5.2 and the only reason I didn’t make the time to pay through the whole game was because I couldn’t.  I also tested on the Mega SD, as well as the Everdrive x5, x7, MISTer and emulation, but the same thing always happened:  After power-cycling the console (or restarting the emulator), your save file would be blank.  Alternatively, if you died and went back to the title screen (or soft reset), your save file would persist.

Well, that seems to be fixed with this latest version and the game seems to be really stable.  I think now’s the time to really dig into the game and see how the port translates to the Genesis.  I absolutely loved the Wii version and hopefully the Genesis version will equal or exceed the previous ports!

Now the only question is if I should play it on original hardware via a ROM cart, or on my MiSTer.  Savegame files aren’t directly compatible, so I might have to choose… 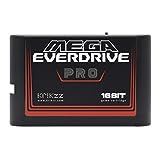 Here’s the full list of changes posted this summer: