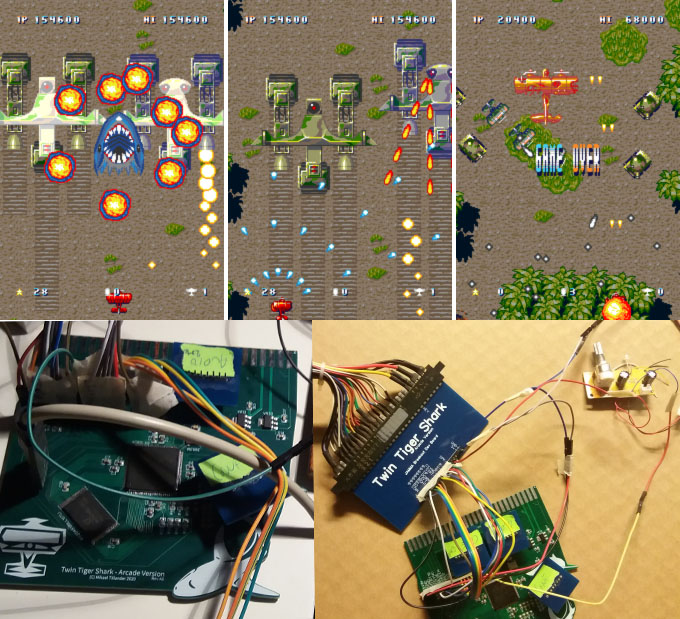 A Kickstarter for a new JAMMA arcade game called Twin Tiger Shark has just been funded, with about a month to go.  Developer Mikael Tillander has re-made a previous game with a lot of enhancements, as well as resized to fit the 320 x 224, vertically-oriented (TATE) resolution you’d expect for use in a CRT-based arcade cabinet.

I downloaded the original and it seems like a fun, but hard game;  It’s a “one hit and you’re dead” style shooter, so if those frustrate you, this isn’t for you.  If you like a challenging vertically-oriented shooter with good music, I suggest at least trying the PC version and seeing if you’re interested in the new JAMMA version.

The project has a target ship date of about a year from now, which makes sense as it seems the project is far from complete.  Price is $180 for just the JAMMA PCB, $240 for a complete kit and $270 for the complete kit + “ROM upgrade”…and the ROM upgrade is my first concern.  According to the Kickstarter:

“Within a year of the Kickstarter shipping, an updated version of the game ROMs will be released to the backers having this option. A new ROM board and mounting instructions will be sent. The ROM upgrade will contain eventual bug fixes and changes according to feedback.“

So, what happens to the people who bought the other two versions?  Would they be required to pay for an update for a game they already purchased!?

Another thing that really stands out to me, is what’s missing from this project.  See, the game is running directly from an FPGA on a small board with JAMMA outputs, which makes sense:  Instead of designing and manufacturing a complete motherboard, the developer has used an FPGA core to mimic arcade board hardware.  The use of an FPGA is a good idea and could allow for some awesome features…but there are none.

A design like this has the potential to include things like an HDMI (or VGA) output, USB controller ports and a USB port for power & updating.  Think about the missed opportunity there!  First, you’d be able to use it like a standalone “mini console” and even if the HDMI (or heck, even VGA) only outputted 480p, you could at least have a way to play it outside of an arcade machine.  Also, having USB controller ports would allow for people with arcade cabinets to also connect their stick of choice, if they felt the need.  And, of course, a second video output would allow people to easily stream the game – All developers in modern times should realize how important streaming is!  No amount of marketing a small company could afford will ever go as far as streamers playing the game and sharing their experience with others.

The creator has disclosed that they aren’t a hardware engineer, which explains the exclusion of extra features:

“Not being an electrical engineer, the hardware development is the most challenging, rewarding and fun part of the project.“

My nitpicks aside, I’ll still probably get one, as I love the idea of a new, fairly-priced arcade game.  I just wish the creator consulted some people who are still active in the arcade scene, to get some feedback on features most people would want to see in a 2021 release.