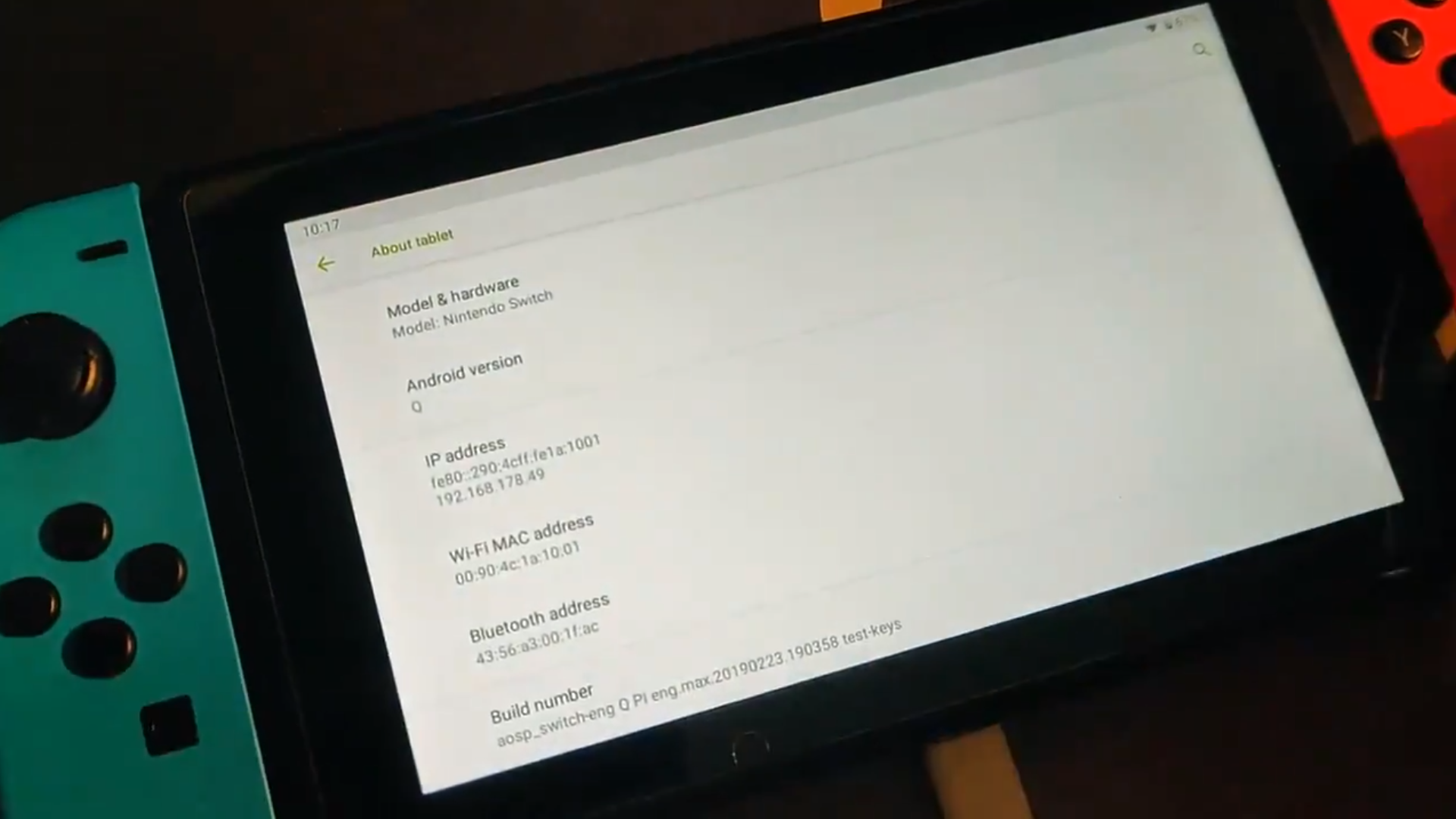 Enterprising hackers have made progress on getting Android Q to boot on the Nintendo Switch.  This is impressive since in the Android world, this version of the OS has not even been officially released by Google.  For example, the Nvidia Shield TV shares much of the same architecture as the Switch but is still running Android O. That’s two versions behind this OS!  Both the Nintendo Switch and the Nvidia Shield TV use the Nvidia Tegra X1 chip (though the Switch is underclocked) to power their respective platforms.

Currently, the touchscreen, joy cons, WiFi, & Bluetooth are working.  Performance is expectedly laggy as there are no GPU drivers yet.  This is a bit of a double whammy since it’s an early WIP build of an OS that is also in an WIP state.  The current Android build is Pie. As a Pixel (and Shield TV) owner, Google hasn’t even opened up the beta testing process for consumers yet which means that this build is most likely a very early AOSP image.  Generally, new OS versions are released by Google around late summer/early fall with testers having access to beta builds around late Spring/early Summer.

Though the Switch has already been hacked through a hardware exploit allowing for homebrew software to run, some may appreciate the added flexibility that Android would allow. If drivers are able to be ported from the Shield TV (or compiled through other means) then that could mean that a stable build with decent battery life might not be out of the question.  If dual booting ends up as a possibility, coupled with the current price drops and announcement of newer & faster Micro SD cards, gamers may end up with a plethora of gaming goodness.

Android may have its quirks, but Nintendo also has its own strange limitations.  Generally, cross platform titles will likely run better on the stock OS, but with so many Android games getting released, it will allow for the best of both worlds.

The availability of Drastic DS on the Switch would be a game changer as it would allow for fast & smooth Nintendo DS emulation with fairly low hardware requirements as well as excellent compatibility.  Services such as Philo TV ($16 a month live cable TV) and home automation apps with support for the Switch’s easy dock/undock feature would allow for some fantastic possibilities.  The Switch would become a full fledged tablet.

I know that it all sounds great, but for now, let’s keep our expectations in check.

Addressing some questions about Switch Android: Audio does not work yet, but BT audio should be doable soon, USB doesn't work yet. The screen has a funky color scheme currently which should be fixed with real GPU drivers. Joy Cons work but need tweaking. #NintendoSwitch #Android

It’s still early. Hopefully, the talented hacking community get as much utility out of the Switch as they did with the Dreamcast, PSP, Xbox, Wii, and the PS3.