The RetroTINK2x line of products are zero lag, 480p HDMI linedoublers for retro game consoles!  They’re all great choices for people starting out in retro gaming, or for people just looking for a “no fuss” solution.  Here’s the different models available:

RetroTINK 2x Mini – Amazon / TINKDirect:  The perfect entry-level scaler;  It only supports composite and S-Video inputs, but it’s inexpensive and simple to use.

RetroTINK 2x Multiformat – TINKDirect:  This version of the RetroTINK is perfect for consoles that output component video in multiple resolutions.  It can convert 240p and 480i to 480p, as well as pass through 480p, 720p and 1080i signals.  This makes this an excellent device for the PS2, Xbox and Wii!

Original RetroTINK2x – Discontinued, replaced by the Mini.  Anything new still being sold is a cheap, low-quality clone.  Don’t waste your money on that!  If you already own an original RetroTINK 2x “Classic”, you might want to upgrade your case to an awesome 3D printed one:  https://laserbear.net/shop/ols/products/retrotink-2x-classic-snap-fit-case

Here’s video reviews with a full written review below those:

The RetroTINK 2x & Pro have composite (cvbs), S-Video (Y/C) and Component Video (YPbPr) inputs that support signals from all retro gaming consoles.  The inputs can only be used one at a time and it’s strongly suggested that you do not leave consoles plugged in at the same time, even if they’re off.

The Pro uses the green YPbPr input as composite video, with all other inputs separate.

The 2x SCART only has an RGB SCART input, nothing else.

The RetroTINK 2x can accept 240p and 480i from all inputs.  240p signals are supported properly, allowing for a completely progressive linedouble to 480p.  480i signals are deinterlaced and doubled also to 480p.  As an FYI, 480p is not supported at all as an input resolution.

Any decent quality Micro USB charger can be used to power the TINK2x, as it’s a very efficient device.  I was even able to power mine via the USB ports of my TV!

Both NTSC and PAL signals are supported, but no conversion is done.  That means you can plug in whatever signal your target device is compatible with, but NTSC might not work on PAL HDMI devices and vice versa.

The RetroTINK 2x products were designed with simplicity in mind.  Each have slightly different features:

The 2x SCART offers one button that cycles though regular, filtered and scanline modes.

The Original RetroTINK 2x has two buttons:  One to select the input and the other to toggle between regular, filtered and passthrough modes.

The RetroTINK 2x Pro separated some options:  The input button selects the input and filter button toggles regular, filtered and scanline modes.  Then there are two separate switches on the side:  One to toggle between 480p and passthrough modes and another to toggle the comb filter.

The smoothing filter mode is the same on all devices and is completely preference-based.  The average retro-gamer usually prefers the filter off for 2D games (SNES, Genesis, etc) and on for 3D games (N64, Saturn, etc).   Also, the filter might help reduce flicker with some 480i-only games.

Here’s an example of the FIL mode vs regular 2x on the SNES: 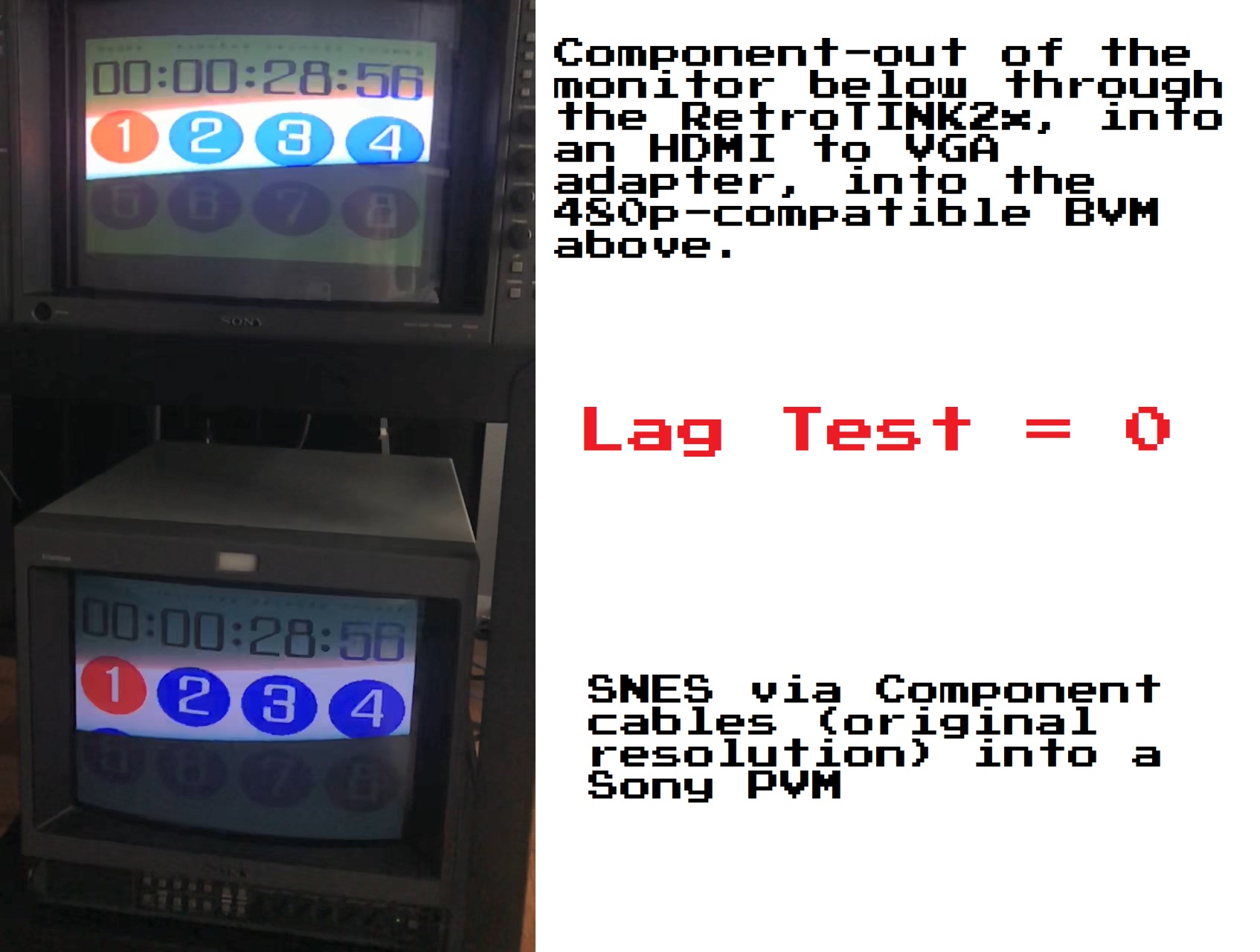 Another great feature of the RetroTINK products are they output a true 480p60 signal, making it compatible with every device I tested it with!  Compatibility is a big issue for retro-gamers, as modern displays aren’t used to the resolution or refresh rate of these older consoles.  This device is an excellent help for streamers who want the highest chance of compatibility.

At the moment, the only direct alternative to the RetroTINK 2x products are the RAD2x HDMI cables, also designed by the same person, Mike Chi.  They all offer the same 480p scaling and filter, but no scanlines and no passthrough.  Generally speaking, if you only have one or two consoles you’d like to use and there’s a RAD2x cable available for both, that might be an easier solution.  For people with multiple consoles, the RetroTINK products might be overall more cost efficient.

If you’d like a step up in performance from the RetroTINK products, the OSSC is currently the best scaler on the market.  It offers incredible sharpness and performance, with a few complications:  It’s not compatible with all displays or capture cards, for the best results you need to load custom profiles for each console and game mode and it doesn’t offer lower-quality inputs like composite or S-Video.  In my opinion, if you’re using a full RGB setup and don’t mind the constant tweaking, it’s the best choice…but if you just want to plug in and play with no fuss, the RetroTINK products win.

I wanted to show a fair comparison, but that’s tricky.  If I showed the OSSC fully tweaked, it would look as good as an emulator.  I thought a better comparison might be to show the RetroTINK products next to the OSSC in “generic” mode in 480p.  Overall, the OSSC is better, but as the picture below shows, when set to 480p mode, they’re both excellent (RetroTINK2x on the left). 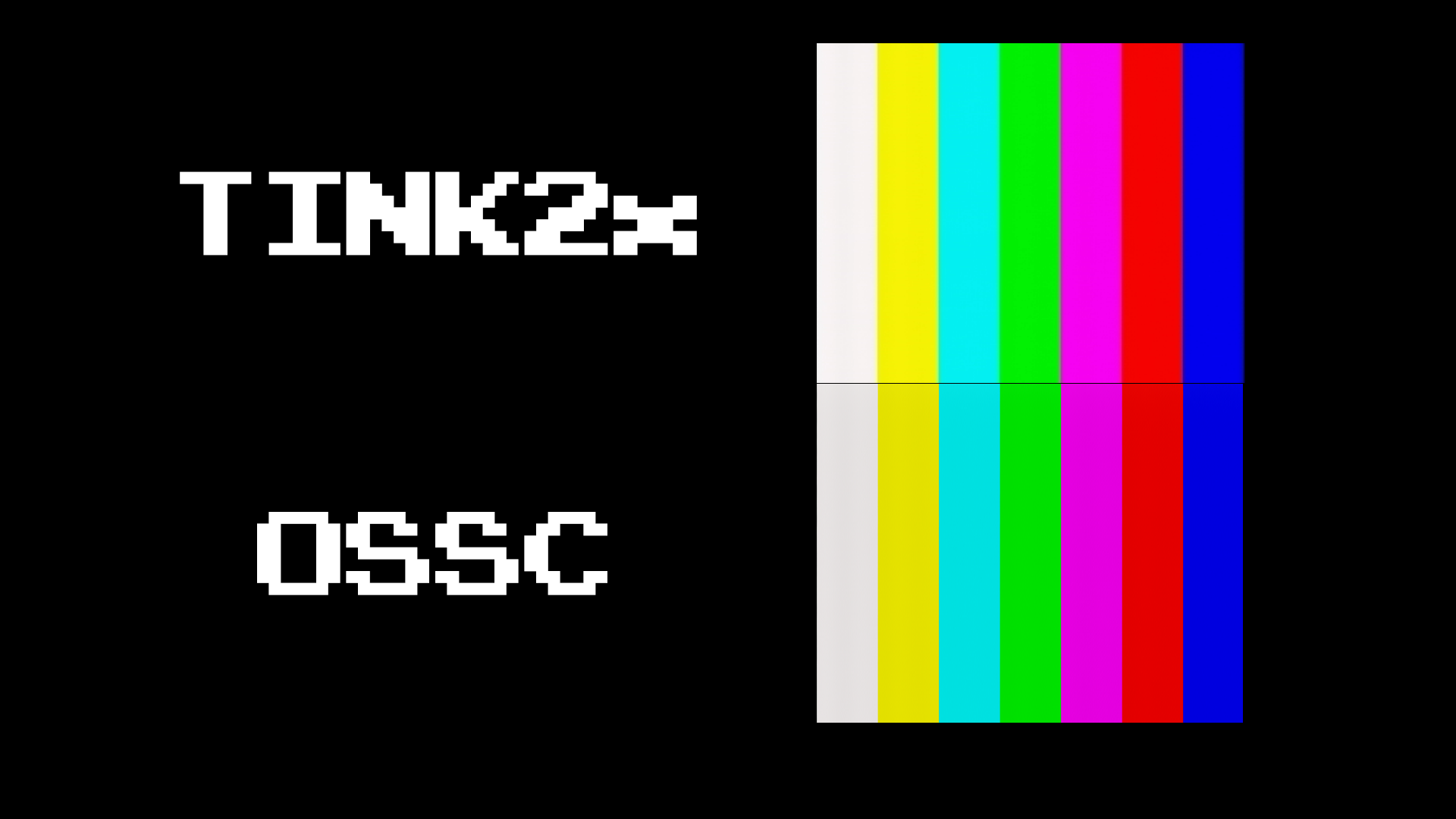 I think the RetroTINK products are a device useful for every retro-gamer!  People just starting out can use it as their “jumping off point” and there’s a good chance it’ll be all most people need.  If in the future people want to upgrade to an OSSC, this is still an excellent device for video capture, as well as just overall compatibility.  In fact, I’d go as far to say that for serious enthusiasts, it’s a good idea to eventually own both.