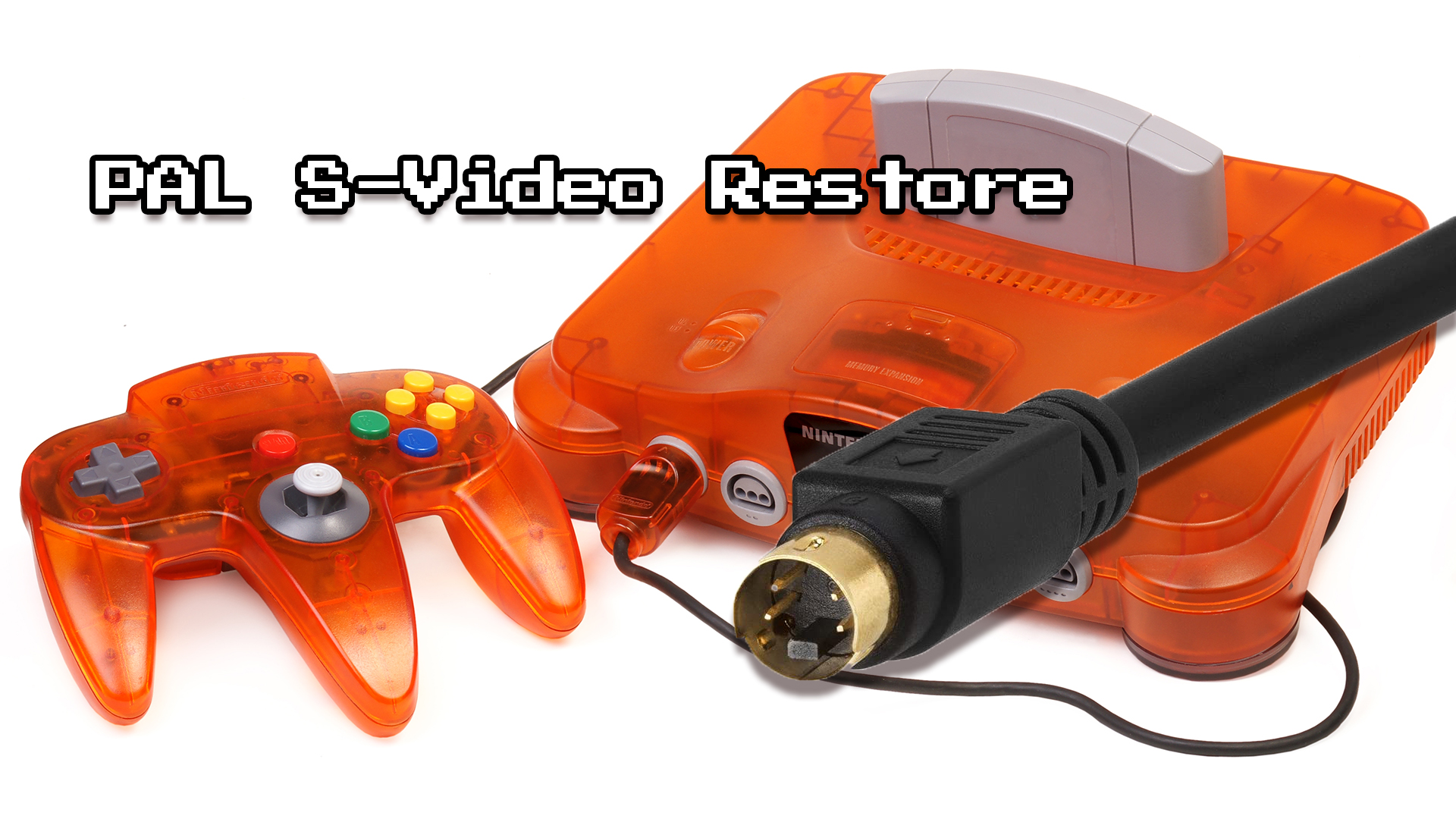 Jan from Consoles4U is developing a fix for the few PAL N64’s that don’t output S-Video.  One more component needs to be identified, then a fix can be documented that still requires a modification…but one that’s far easier than the “advanced” RGB mod’s that would be required on the incompatible revisions.  Here’s more info:

The Nintendo 64’s video output is an unfortunately confusing discussion, that includes both region and motherboard revision issues.  Here’s an easy breakdown of all the video-out options from the N64:  All N64’s support composite video out using the same cable and luckily, the composite signal from an N64 is very good.

Next, all N64’s can be modded for RGB, but unless you have an (easily identifiable) early NTSC revision, it’s a complicated mod.  Here’s more info on how to find which model you have and the options available:  https://www.retrorgb.com/n64rgbcompatible.html

Finally, all NTSC and most PAL N64’s can output S-Video without a mod, but you’ll need a different cable for PAL than NTSC.  Also, figuring out which PAL models don’t support S-Video can be confusing.  At the moment, it’s believed that the NUS-CPU-P-03 (Pikachu and Funtastic) and the NUS-CPU-R-01 (French release) are the only ones that don’t support S-Video from the factory, but you’ll need to connect your cable to be sure.

So, what happens if you connect a proper S-Video cable to a PAL N64 and don’t get a signal?  Well, the incompatible PAL models would all require the much more complicated RGB mod, but that’s a possibility.  Another option would be to restore the N64’s S-Video circuit to the multi-out.

Jan from Consoles4You has been researching exactly what’s required to accomplish an S-Video restore and has made some good progress.  There seems to be two steps required:

Re-connect the luma and chroma traces from the chip:

The Y&C pins from the MAV-NUS chip are just floating and not connected to the traces that are right in front of them!  To restore, you’ll need to first scrape off a tiny bit of the motherboard layer in front of pin 25, then solder a jump between that pin and the trace.  Then connect pin 29 on the chip to the via directly above it.

I have no idea why this wasn’t just done from the factory.  It almost looks like more work not to connect them!: 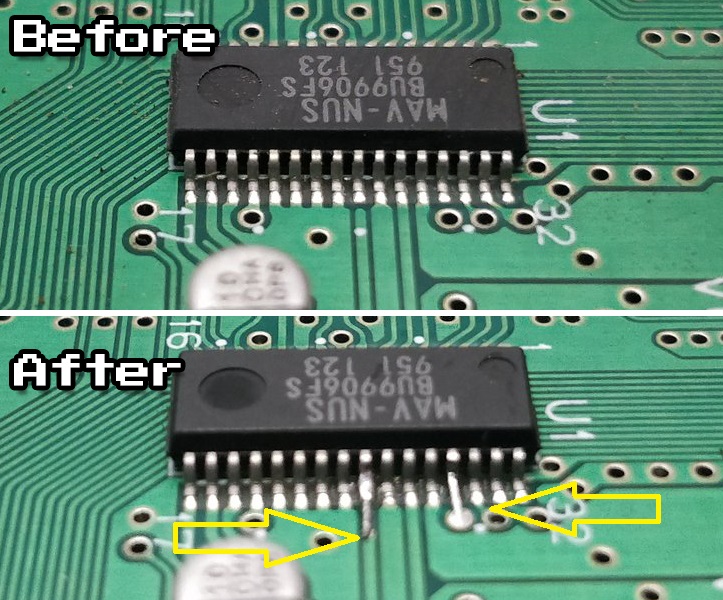 Restore the missing components near the multi-out:

Now you’ll have to re-populate the four missing components near the multi-out.  In order to solder them, you’ll need to carefully scrape off the mask over the pads and solder them in place.

On top are two 47pF SMD capacitors. You’ll need to cut the traces between them, then scrape the green mask over the mounting squares.

Below that, DA7 and DA8 appear to be two ESD diodes with different polarity.  We’re not currently sure of the value, but Jan was able to transplant ones from a broken N64 motherboard and afterwards the signal was restored: 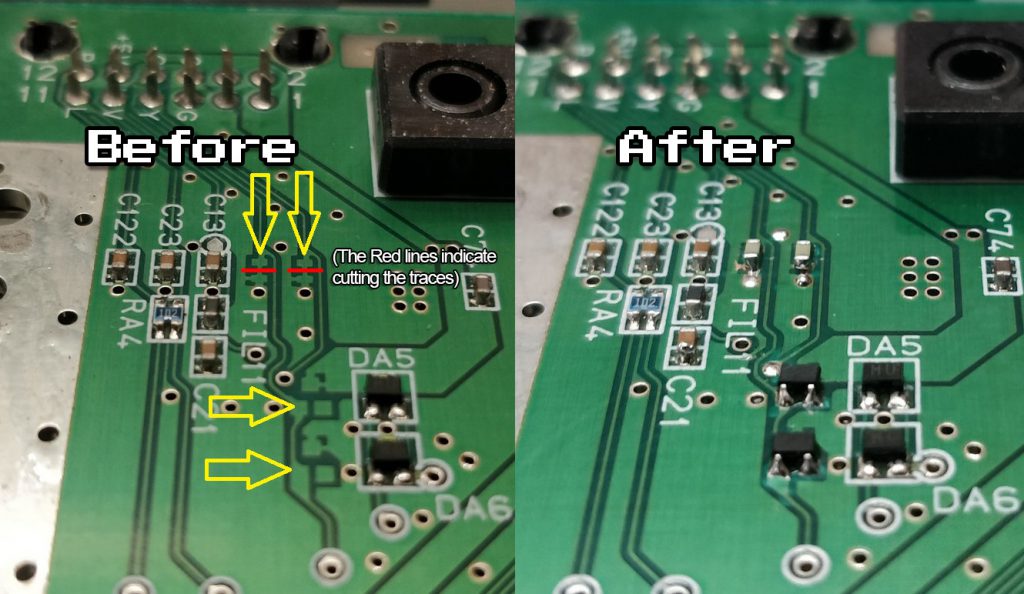 We’re currently trying to determine the exact values of the two ESD chips and are researching the possibilities of having a board that drops over the multi-out pins and connects Y&C from the two via’s on the motherboard.  This would eliminate any need for mask shaving and component replacement on the rear side of the motherboard.  You’d still need to re-connect the traces on the chip as shown above though.

If you have any info on the exact parts required for DA7 & DA8, please let us know! 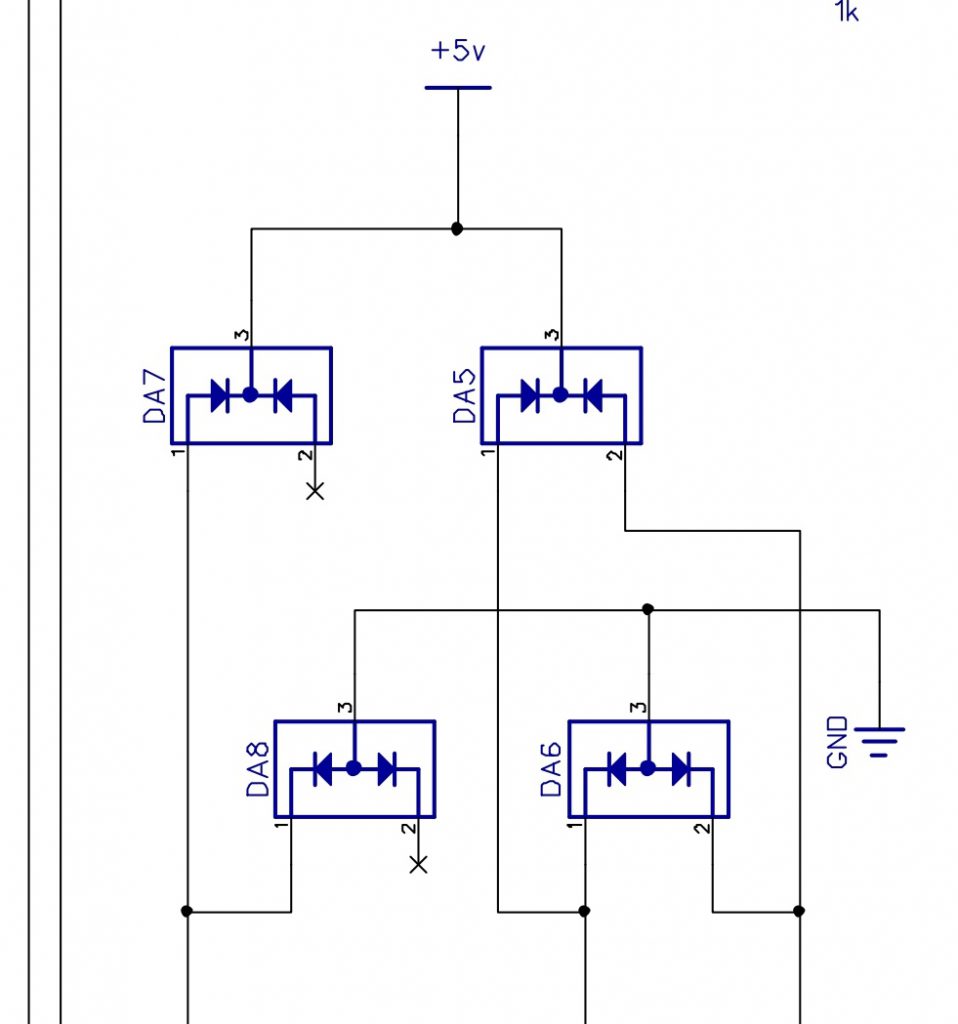 Today I took a closer look at the Pal N64 (P)-03 motherboard without s-video support and found some familiar footprints. I populated them and checked for s-video. No signal. But I soon discovered that BigN had cut the traces to the encoder. Reconnected and now I have s-video. pic.twitter.com/ytDe0W0wI4