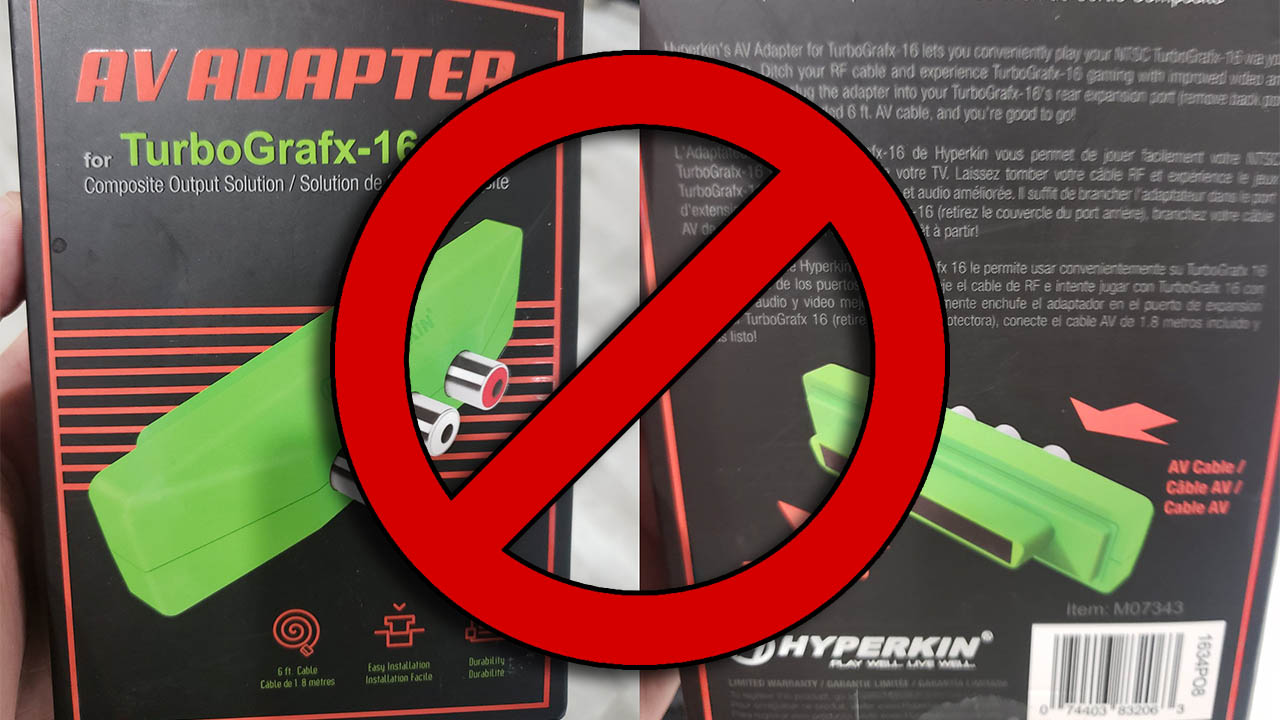 UPDATE:  Hyperkin admits their product is junk.  Please see below.

Voultar just posted a detailed analysis of the Hyperkin TurboGrafx-16 composite video adapter, as well as the PCE/TG-16 video circuit.  These are the same thoughts he expressed a few years ago and the reason I’ve always recommended people stay away from the adapter (as shown in my PCE video, linked below).

I’ve re-posted the whole analysis here, as it’s much easier to follow than a Twitter thread, edited for clarity and to remove Voultarisms:

Whether you used fixed gain video drivers or do it how NEC/Hudson did, there’s more to getting proper composite video out of a PC-E/TG16 than plugging an RCA cable into the expansion slot:

I’ve seen guides and even products from companies such as Hyperkin which passively connect to the rear expansion port of the TG16/PC-E with RCA jacks for composite video.  COMPOSITE VIDEO OFF OF THE EXPANSION PORT IS NOT SUITABLE TO INTERFACE DIRECTLY TO A TV! PERIOD!

The “CVBS” you’re getting off of the expansion pin is a “muxxed”, unattenuated version of composite video which interleaves the luma, chroma, and sub-carrier signals into one, codified signal. This muxxing is done OUTSIDE of the DAC. But that doesn’t make it “TV” friendly.

Everything in this picture represents what’s in every PC-E console (minus the portables) – Pins 26, 35, and 40 are chroma, colorburst, and luma outputs. These are weighted, mixed and staged, all the way to R11 where they’re muxed into a single, codified signal & output 2 the exp. 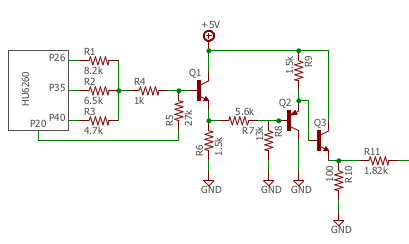 This is the crucial part that’s missing.  This is the final staging amplifier that is required to properly drive the muxxed, composite video to a proper amplitude with PROPER impedance control and PROPER DC rejection.  You HAVE TO HAVE THIS. 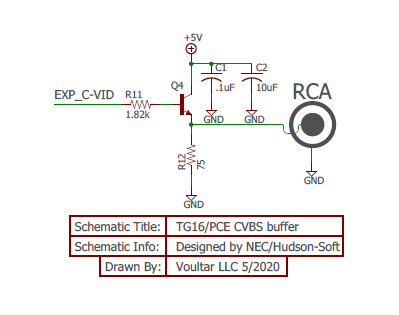 Let’s take this baby a part and see if Hyperkin are actually doing proper analysis whilst designing these things: 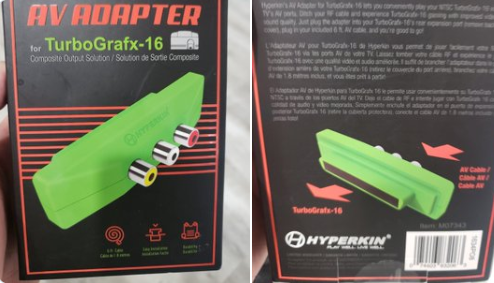 Surprise, surprise.  No, they didn’t. Neither video OR audio are being transmitted properly, much less even terminated properly!!!!!!  I would say this is unbelievable, but it isn’t. 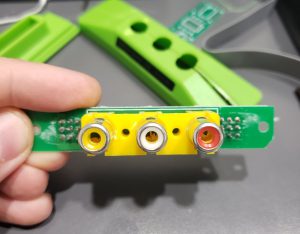 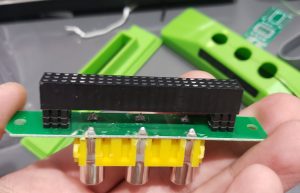 I just don’t understand how could design something like this which is missing some very important biasing on the video line.  Ste Kulov of HD Retrovision even offers a hand-drawing of it on his website:  https://www.hdretrovision.com/free-stuff#tg16

Zach then goes on to express a passionate opinion about how and why these things get made they way they do and why people still think it’s okay to use them.  While I (Bob) agree 100% with everything he said, it’s my opinion that the language isn’t fitting with a typical RetroRGB post, so I’ll explain it in my own way.

As a result, anyone who uses this adapter is sending uncoupled AC voltage through the composite video input of their device.  What exact does that mean?  A few things actually.

First, there’s a small safety issue, as if you accidentally bridge composite video to ground, you can short out the transistor in the console.  While that’s not a common scenario, it’s something to take note of and much less of a risk with a properly built circuit.

Also, the DC offset without the buffer could make the receiving device burn more energy at the input.  Most devices should be well designed enough to tolerate that, but that’s not a risk I’m willing to take.  Since the damage (if there is any) would be done over a long period of time and shorten the lifespan of the console, this message is incredibly hard to convey to people;  Many will respond with ignorance like: “I bought this two years ago and my console is fine, so you don’t know what you’re talking about”.  Any level-headed person can see that’s the same as saying “I’ve been smoking for 30 years and still alive, so clearly cigarettes don’t hurt people”, but unfortunately, this misinformation is spread and re-told enough times that many people believe it.

Lastly is picture quality:  Not including these components will darken the image and potentially add interference.  Contrary to what many people have misunderstood over the years, composite video on a CRT is an excellent way to experience all games from the pre-HD era (anything that’s 240p or 480i). For someone on a budget, buying a cheap Hyperkin adapter and using their TG-16 on a consumer-grade TV they found for free would have been a really awesome way to enjoy those games for cheap, but Hyperkin was either so ignorant they didn’t look up the readily available schematics, or too cheap to spend $0.40 on the components needed to fix this circuit.

Hyperkin saw the tweet and claims they’re “talking to their dev team” about it.  Considering this is the same company that uses laggy scaling chips designed for TV signals in their HDMI game consoles, I’m wondering if there’s a “dev team” at all;  1st year engineers wouldn’t make the mistakes they constantly do: 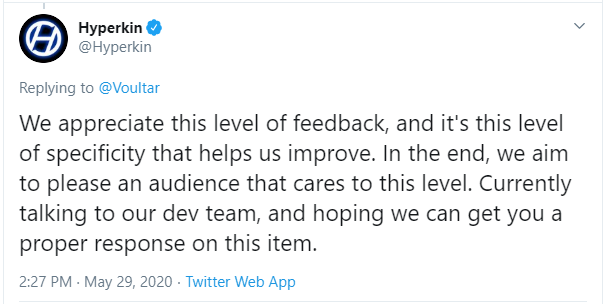 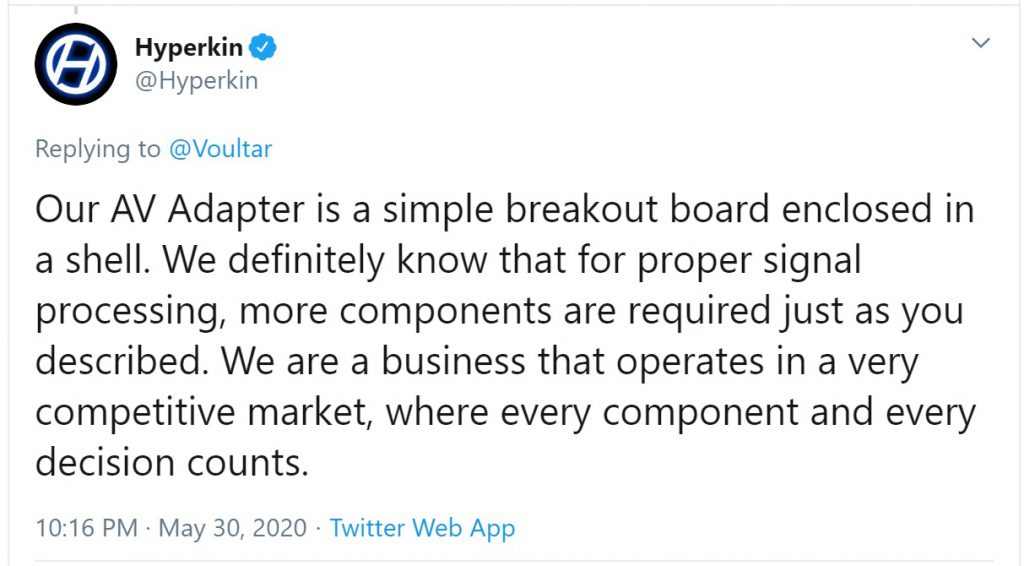 Follow this thread, because I'm going to be dropping some truth bombs.

Whether you used fixed gain video drivers or do it how NEC/Hudson did, there's more to getting proper composite video out of a PC-E/TG16 than plugging an RCA cable into the expansion slot. That's bbbaaaaaad! pic.twitter.com/fQ7qy0uOKx