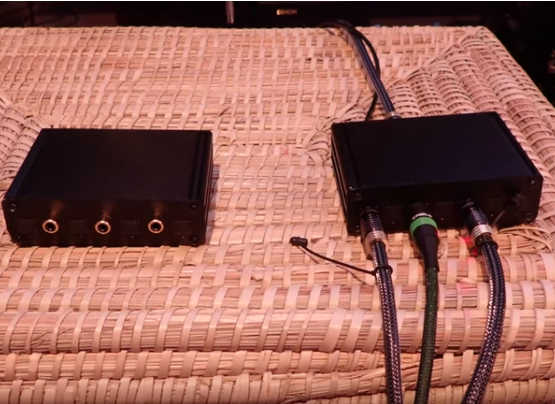 The Automatic SPDIF (Optical/RCA) Audio Switch available on Tindie from creator Beni_Skate has been making waves in the retro community recently.

Contributor Vanessaira brought news of the switch to the site last month. And this week I’ve had a chance to run it through some tests to see how it performs.

Last week I received 2 configurations of the device. The first has 7 toslink inputs and a single toslink output. The second has 4 toslink and 3 coaxial inputs, along with 1 toslink, 1 coaxial, and analog stereo outputs.

I was excited to have the set in my hands because these are the first digital audio switches I’ve seen that have automatic input selection. A feature that is sure to bring relief to digital audio enthusiasts who have suffered from a lack of good switching technology to leverage their dwindling supply of receiver ports for years.

The units performed flawlessly in my first round of testing where only one source is active at any given time.

For my second set of tests I wanted to stress the port priority system a bit to see how it behaved. I plan to leverage the priority system daily by leaving an analog stereo to digital audio converter on the lowest priority port that’s responsible for keeping analog-only consoles represented in my setup.

The advertised behavior is that lower numbered ports have priority over higher numbered ones. But will fall back to the lower priority source if the higher priority one isn’t sending a valid signal for a while.

There was a secondary unadvertised behavior where signals sending “Zero Packets” (silence) for several seconds would become invalid. And the switch would go back to a lower priority port.

This became a problem for several of my test scenarios. Namely PS2 boot sequences and the SD2SNES selection menu. Both would stay silent for too long and cause me to lose signal and select a lower priority port.

I was able to contact the creator and get a piece of PC software to help configure my devices and disable silence detection. The software was extremely easy to use and my switches were reconfigured in seconds. Once silence detection was disabled the switches always did exactly what I needed them to and I couldn’t be happier with them!

If you’re looking to wrangle your digital audio situation. Or like me you’re just dipping in your toes while keeping a firm footing on analog. It’s a good buy.

Follow the video for an in-depth look at testing. Or jump over to the thread on shmups for updates. 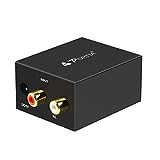 (1191)
【Analog to Digital Audio Converter】Converts analog R/L stereo audio signal to Digital SPDIF Optical Toslink and Coaxial signal simultaneously. Note: Can NOT be used as a digital to analog converter 【High Sample Rate】Supports output sampling rate at 4... read more
(as of September 26, 2021 - More infoProduct prices and availability are accurate as of the date/time indicated and are subject to change. Any price and availability information displayed on [relevant Amazon Site(s), as applicable] at the time of purchase will apply to the purchase of this product.) 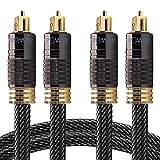 (8310)
$14.99
[PROTECT YOUR TOSLINK CABLE WITH BUILT-IN END CAPS] FosPowerâ€s toslink digital optical audio cable has built-in end caps to protect your connectors. No longer worry about broken connection points. [INTERFERENCE FREE TOSLINK CABLE] No more Interferen... read more
(as of September 26, 2021 - More infoProduct prices and availability are accurate as of the date/time indicated and are subject to change. Any price and availability information displayed on [relevant Amazon Site(s), as applicable] at the time of purchase will apply to the purchase of this product.)

(4180)
$7.99
[MALE TO MALE] Connectors: 1 Digital Coaxial Audio male to Digital Coaxial Audio male 6ft cable. [COMPATIBILITY] Works on all types of digital coaxial audio ports, including hard to access recessed ports. [COLOR CODED CONNECTORS] Orange color-coded c... read more
(as of September 26, 2021 - More infoProduct prices and availability are accurate as of the date/time indicated and are subject to change. Any price and availability information displayed on [relevant Amazon Site(s), as applicable] at the time of purchase will apply to the purchase of this product.)
Liked it? Take a second to support Dave Kircher on Patreon!