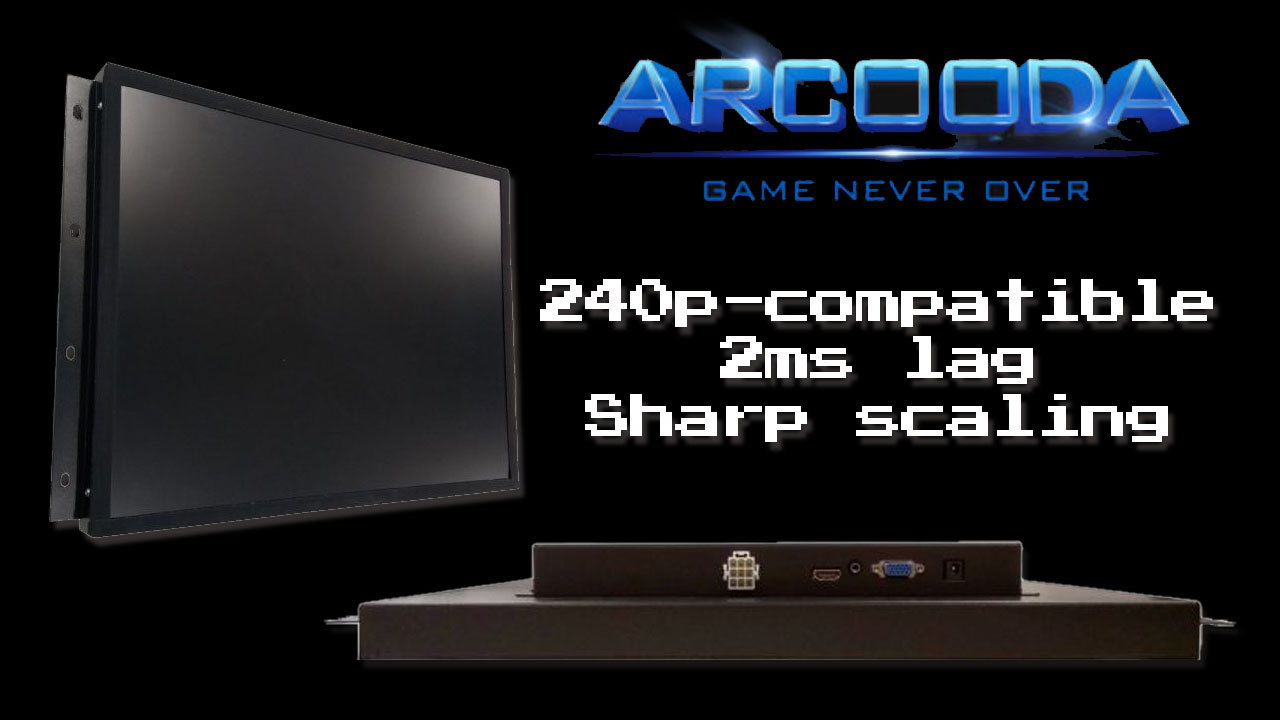 I just had a chance to test the Arcooda 20″, 4:3 flat-panel monitor that was designed as an arcade monitor replacement.  It accepts resolutions from 240p to 1600×1200, has 2ms of lag and scaling can be set to sharp for retro games.  While this isn’t a true CRT replacement, I was really impressed.  The full livestream is at the bottom of the page, but a basic summary can be found below the links:

I started out by lag testing the panel in all modes and both the analog and digital inputs showed under 2ms of lag in the upper left corner.  Now, keep in mind that since this isn’t an OLED (I think it’s a basic LM201U05-SLM1), there will be some motion blur and the lag might be perceived as a bit more, but 2ms is really respectable.  That alone was enough to make this worth most of our time, but the positive points kept piling up.

The next thing I tested was RGBs compatibility.  While it required TTL-level sync, it was able to accept a 15KHz/240p RGBs signal through the dsub port.  If you wanted to, you could easily use a basic adapter like the SCART Cleaner to take any RGB SCART signal and make it compatible with this display.  JAMMA signals are compatible via an add-on board, but I couldn’t find a direct link for it anywhere (although it’s mentioned on the main product page).

After that, I tested the sharpness setting…and to my absolute shock, it worked!  Now, before I go any further, keep realistic expectations:  This isn’t an RT5x built into a display.  BUT, in the context of a “free” scaler built into a flat panel, this was really impressive.  I imagine many of you would find the sharpest setting more than good enough to use.  Also, it seemed the original image was scaled and centered, not stretched, so the aspect ratio of 4:3 was retained.  That’s excellent compatibility for what seems to be an off-the-shelf controller board!!!

The HDMI input worked well and MiSTer set to 1600×1200 (Video_mode=1600,1200,60) looked excellent.  Also, leaving the sharpness at it’s highest setting didn’t seem to affect the image at all when the native resolution was sent, meaning you can just leave it at 4.

One very important thing to note, was the monitor was fully compatible with MiSTer’s low latency mode (vsync_adjust=2), even with odd refresh rate cores like R-Type’s 55Hz, Wonderswan’s 75Hz and GBA.

There were some downsides:

The biggest downside is there isn’t a stand, as this was meant to be mounted as an arcade CRT replacement.  Hopefully some creative DIY cases will be released at some point though!

1080p was accepted, but won’t properly fill the screen since it’s a wide aspect ratio being sent to a 4:3 screen – This is something you’d run into with any modern 4:3 screen, including the LCD CRT.  That said, if you’re connecting a device like an HDMI modded console, try setting the console to “fill” or “16:9 stretch”, as that will most likely fill the screen properly.

Some menu options didn’t work and sometimes the up and down buttons were reversed.  While this should be an easy fix, it would require a special programmer to apply the update.  I certainly wouldn’t call the menu “broken”, but it would be nice if it were cleaned up in future revisions.

The last input was remembered after power cycling.  In almost every case this is a good thing, but I wasn’t able to get into the menu to switch inputs – I had to connect a second source, then access the menu to switch.  Not a huge deal, but you should be able to access the menu with no signal detected.  Or, maybe you can and I was just too impatient?  It happens…

I’m impressed.  Really impressed.  Once again, this isn’t some beautiful 120Hz OLED with BFI…but it’s a $250, 4:3, 20″ flat panel that performs exactly as we might hope.  If you’re on a budget, you truly can use this as a replacement screen for your arcade monitor, with only their JAMMA adapter board required along with it.

DIYers could build a stand and connect their RGB SCART cables directly to the VGA input via a cheap adapter like the SCART Cleaner.  Or, you can connect a MiSTer, or scaler to it’s HDMI input for a very good experience.  In fact, if you’re someone trying to charge over $500 for an 5:4, 18ms lag LCD panel in a CRT-like case, maybe consider picking up this panel with a similar set of electronics and write a similar firmware?  Or just ask Arcooda for bulk discounts, since they did all the hard work already!

I’ll follow up if any companies release this panel with a cool case / mounting solution, but if you’d like more info on this panel right now, check out the full livestream: